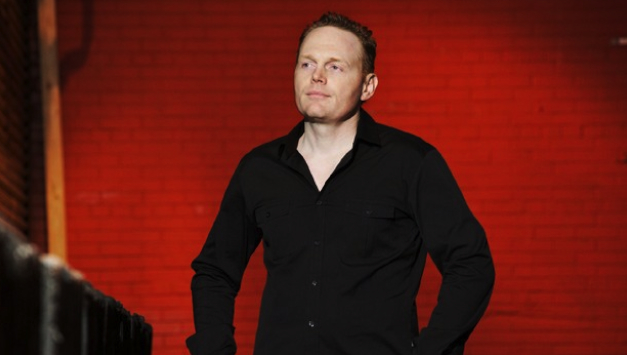 After receiving a healthy career boost from his appearances on Chappelle’s Show, Bill Burr set out on the journey of a successful, modern-day, working comedian. Tireless touring, hour-long HBO and Comedy Central specials, small appearances in big films (last year’sDate Night with Steve Carell and Tina Fey), and a rambling weekly podcast (the aptly named Monday Morning Podcast) all showcased Burr’s confrontational—yet reassuringly sympathetic—approach to comedy. A second Comedy Central special, 2010’s Let It Go, further solidified his status as a solid comedian’s comedian. In advance of Burr’s Anti-Social Comedy show tonight at the Chicago Theatre,The A.V. Club chatted with the comic about his typical day, depression, The Rolling Stones, and why hockey should just embrace its hockey-ness.

The A.V. Club: Walk us through a typical day of Bill Burr.

Bill Burr: On the road or off the road?

AVC: Let’s start with off the road.

BB: Well, I wake up, give my girlfriend a kiss, go to the kitchen and make myself a carrot juice with some ginger and an apple, take my pit bull for a hike, and then I sit by the phone and wait for it to ring. The phone doesn’t ring, and I realize that I’m still not a working actor, and then I decide to book some road work.

BB: Get on the airplane, sit in coach, try to sleep, get annoyed with the person in the window seat because they keep getting up to go to the bathroom, land, order some awful quesadilla at the hotel, go to sleep for three hours, wake up, do four hours of radio, come home, try to fall asleep while the sun’s out, lay there in the fetal position, and then I do my show. That’s how it works.

AVC: Do you enjoy it?

BB: Everything but the travel. I love doing radio, and I love doing stand-up, obviously. I’m good flying up to four hours, but anything past that, I want to kill myself.

AVC: So the stereotype of comedians being horribly depressed and neurotic is true?

BB: It’s true in the way they say Irish people are drunk. It’s a stereotype that’s been earned. It’s not as bad as people make it out to be, and it’s almost a cliché at this point. I’ve battled with that type of stuff, but what I’ve found is that by doing stand-up, I’ve actually learned about depression and how to combat it. I don’t have clinical, but I’ve definitely had my bouts with it. I just figured out that it’s a choice. You’re in control of your brain. When your brain is sending you bad information or bad thoughts, you can decide to go to the gym, or write a new joke—or if you’re on the road, go to a ball game… something that’s going to get the blood going. Or you can let those thoughts take you right down the rabbit hole.

AVC: You mentioned not being a working actor. Is that something you’re actively pursuing?

BB: I love making movies, and being in any that I can be in. I’d like to be in those giant movies, as the fifth or sixth lead, and have three or four killer scenes. You don’t have the responsibility of the entire movie being on you. I like those roles. I’m shooting for the middle.

BB: Yeah, I don’t want to work. That’s why I do this. I’m not even joking. I get annoyed when I actually have to work. [Laughs.] I’m writing a book, and I’ve worked more in the last damn three months getting ready for the book deadline.

AVC: This isn’t one of those celebrity ghost-written jobs, is it?

BB: No, I’m not at that level yet. That’s when you know you’ve made it—when you can claim you wrote a book you didn’t write. It’s just me pounding the pavement, my friend. Banging out words. Every other sentence I write, I go up to the top of the page and click “word count,” hoping that I’ve somehow written 500 words.

AVC: You’re an avowed sports fan, and a big hockey fan. Are you ever bothered by jokes about hockey? It seems like an easy target.

BB: No—it’s what makes hockey cool. I love that people don’t like it, or don’t get it, or can’t see the puck, or don’t understand why they let them fight. All those things make me laugh. I just wish hockey would accept the fact that it’s a rogue sport and stop trying to appease all these people who complain about the game. And then they make changes based on those complaints, so these people who complain can continue to not watch hockey. Any time a violent incident happens, you can always tell the people who don’t watch hockey. They come out of the woodwork and start describing the league like it’s 1975.

AVC: Do you ever get tired of being a comedian?

BB: The only time I get sick of making people laugh is when I’m in a non-writing-joke mode, and I just can’t seem to come up with anything new that’s funny. That’s a tough place to be as a comedian. I’ve seen guys out there doing jokes—and I maybe haven’t seen them for five years—and I see them doing the exact same act with maybe a new Charlie Sheen joke. That’s a bad place to be. You don’t want to be on stage going, “What’s up with the first Gulf War?” I think the fear of humiliating yourself on stage always motivates me to give at least 90 percent. I’ve definitely been guilty of leaning on the mic stand, but you can only do that so long before you’re like, “Jesus, I’m bombing.” The fact that people now pay to come see me, that’s really just out the window. You can’t do it any more. So now I bring my A-game.

AVC: So at the end of your day, what’s your ultimate goal?

BB: A body of work. I got really inspired a few years ago when George Carlin passed, and they were looking back on his entire body of work. It was all quality. In a musical sense, what you really want to be is the Stones from whenever they first came out, right through Tattoo You. Put out 14 or 15 killer hour-specials. Then they wheel you out, throw the Mark Twain award in your lap, and then you croak.