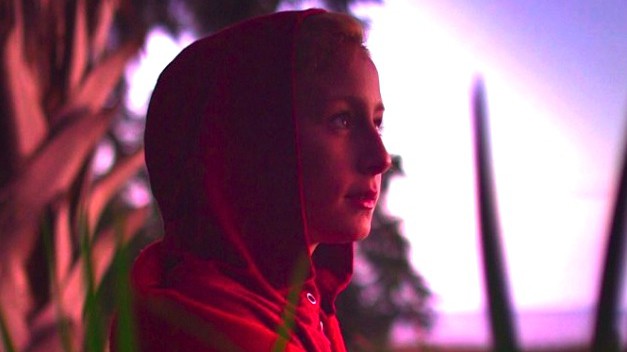 It’s nearly impossible to flip on a television or visit a multiplex without being subjected to a “gritty” re-imagining of a classic fairy tale. Whether it’s Grimm, Once Upon A Time, or Snow White And The Huntsman, Hollywood can’t seem to stop drinking from the trough that Mother Goose built. The tale of Little Red Riding Hood is also a go-to source for easy inspiration, leading to 2011’s Red Riding Hood starring Amanda Seyfried. But Tate Bunker’s Little Red is far from a tired retread of classic material—it may be a loose, modern retelling of the Little Red Riding Hood story, but the film is more concerned with plumbing the darkness of an otherwise charming coming-of-age story than simply decking its heroine out in a red hoodie and a pair of combat boots.

Hannah Obst stars as the 11-year-old Red (yes, she does wear a red hoodie) who sets out from her hometown of Milwaukee to visit Cumberland Island, Georgia. There are wild horses there, and the young girl is intent on seeing them, even if it means embarking on a cross-country trip alone and without notifying her parents. Along the way, she encounters some hostile locals (Red’s Wisconsin roots are mercilessly mocked), a new friend or two, and, most notably, the film’s version of the Big Bad Wolf, played with slimy, grinning glee by Mark Metcalf. The Wolf’s pursuit of Red gives the story its sometimes uncomfortable tension, with both actors convincingly pulling off their respective roles as predator and unwitting prey.

There are plenty of touches throughout Little Red that betray Bunker’s background as an experimental filmmaker: slo-mo shots of surfers, lo-fi dream sequences, and an occasional voice-over from Obst. (The film scores its biggest chills when Metcalf briefly takes over voice-over duties.) The gorgeous cinematography, however, is anything but low-budget, full of carefully composed shots and eye-popping storybook colors. But it’s Metcalf who remains the unnerving star of the show. While never explicit, his performance is so convincingly slimy that it can be hard to watch—especially during an increasingly uncomfortable encounter on a beach. Thankfully, Bunker handles things delicately; Metcalf’s Wolf may be a disgustingly bold slimeball, but the film itself rarely feels exploitative or tawdry. (A later scene on a beach threatens to cross that line, though.)

But for all its implied menace and leering villains, Little Red remains the story of a young girl on an unexpected, life-affirming adventure. “Just ’cause you don’t know what’s out there should never stop you,” a friend tells Red late in the film. It’s that grown-up determination and bravery—even in the face of darkness—that gives the film its bright, beating heart.