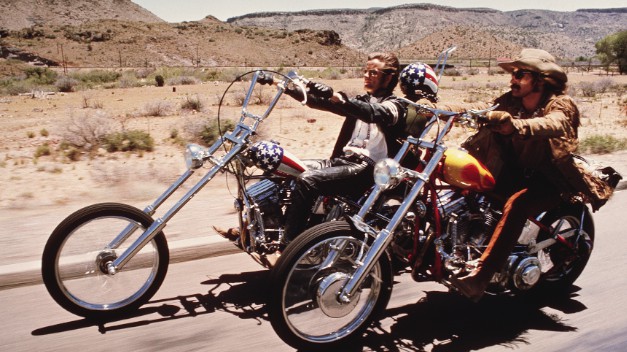 The word “iconic” gets tossed around a lot when discussing Harley-Davidson, and for good reason. The company’s motorcycles and the culture surrounding them have come to embody everything rebellious, individualistic, and teeth-clattering loud about life in the good ol’ U.S. of A.—if you’re into that sort of thing. That reputation has also been solidified by the inclusion of Harley bikes in some of the best American films of the 20th and 21st centuries. Before Harley-Davidson takes over Milwaukee this week and weekend to celebrate its 110th anniversary (a celebration, we’re federally required to note, with far less Elton John than Harley’s 100th), we take a look at some of the best—and some of the worst—films to prominently feature the legendary motorcycles.

Terrific
The Wild One (1953)
László Benedek’s ode to biker outlaws and rebellion, man, has plenty of claims to fame. Not only did it turn Marlon Brando into, you know, Marlon Brando (“What are you rebelling against, Johnny?” “Whaddaya got?”), it also inspired John Lennon to eventually call his little rock ’n’ roll band The Beatles. The film itself is a fairly straightforward morality play, and features two once-friendly and now-rival motorcycle gangs—Brando’s Black Rebels Motorcycle Club and Lee Marvin’s Beetles—raising hell and fighting over old beefs. And while Brando and his Triumph Thunderbird steal the show for the chaps-and-choppers crowd, Marvin’s Hydra Glide Harley is no less awesome.

Easy Rider (1969)
Calling Easy Rider the best Harley movie of all time is a lot like suggesting oxygen is the best breathable element: it’s kind of a no-brainer. The freewheeling tale of Wyatt (Peter Fonda) and Billy (Dennis Hopper) not only changed American filmmaking, it seared an indelible image of Fonda’s 1951 “Captain America” Panhead Chopper into the minds of moviegoers, bikers, stoners, and moviegoing-biker-stoners everywhere. The original bikes used in the films were destroyed and/or stolen long ago, though a faithful “Captain America” replica currently resides in Milwaukee’s Harley-Davidson Museum.

The Rocky Horror Picture Show (1975)
Unless you just arrived in Milwaukee last week, you probably know that the Landmark Oriental Theatre is home to the longest running midnight screening of The Rocky Horror Picture Show. And why not? Rocky Horror has it all, from campy sing-alongs to a young Susan Sarandon in her underwear. It also has frickin’ Meat Loaf blasting through a concrete wall on a WLA Harley and singing one of the film’s best songs, “Hot Patootie—Bless My Soul.” Meat doesn’t quite make it to the final reel—he’s quickly dispatched via ice axe by Tim Curry’s Dr. Frank N. Furter—but his brief motorized appearance certainly trumps his similarly left-field cameo in 1997’s Spice World.

Terminator 2: Judgment Day (1991)
Long before Arnold Schwarzenegger was miscast as a faithful husband and the governor of one of the largest economies on the planet, he successfully played to type. Whether he was playing an enemy-crushing brute (Conan The Barbarian), a mud-covered alien-taunting mercenary (Predator), or an expectant mother (Junior), Arnie was at his best when he was called on to do relatively little. One of his most iconic monosyllabic performances was as the sometimes good, sometimes bad T-800 robot in the ever-diminishing Terminator series. The series’ second installment, however, is the best of the bunch, and features Arnold tearing around on a 1990 Fat Boy while Guns N’ Roses’ “You Could Be Mine” tears up the soundtrack.

Escape From L.A. (1996)
The belated sequel to 1981’s Escape From New York may have fared worse at the box office than its predecessor, but anything involving director John Carpenter’s pitch-perfect “satire-but-not-quite-satire” tone, and at least one scene of Kurt Russell jumping his Sportster onto the back of a truck and shooting a dude on a horse is okay by us. Set in the distant future of 2013, Escape From L.A. is 101 minutes of glorious dystopian cheese, telling the story of Snake Plissken (Russell) and his increasingly ridiculous quest to clear his name—and possibly save the human race in the process. Good work if you can get it.

Awful
Harley Davidson And The Marlboro Man (1991)
There was a brief moment in time when Mickey Rourke was a critically adored Hollywood bad boy, starring in edgy films like Diner, 9 ½ Weeks, and Angel Heart. Then came the ’90s. 1991’s abysmalHarley Davidson And The Marlboro Man marks the beginning of Rourke’s long slide into irrelevance (a late-in-life boxing career didn’t help, either), and is mostly notable for featuring fellow fallen thespians Don Johnson and Big John Studd. Rourke plays the titular Davidson, a biker who teams up with Johnson’s Marlboro Man to rob an armored car and piss off Tom Sizemore. Rourke would bounce back years later with Sin City and The Wrestler, but Harley Davidson will forever remain a blemish on his already blemish-filled IMDB page.

Wild Hogs (2007)
Harley may have provided the bikes for City Slickers Wild Hogs, but everything else about this tepid mid-life-crisis comedy screams “lazy.” Tim Allen, John Travolta, Martin Lawrence, and William H. Macy star as four suburban dolts who attempt to get their groove back by forming a half-assed biker gang. Mild hilarity and tired jokes about aging ensue, as does a soundtrack that features AC/DC, a bunch of Lynyrd Skynyrd, and George Thorogood And The Destroyers. Shockingly, “Bad To The Bone” is not featured—perhaps Wild Hogs’ only redeeming quality.

Ghost Rider (2007)
Nicolas Cage may be a dyed-in-the-wool comic-book fanboy, but that doesn’t excuse the truly crummyGhost Rider. Falling closer to Daredevil than Iron Man on the 21st Century Superhero Movie Spectrum, Ghost Rider is a film that should be fun, but ends up being an overblown bore. Hammy Nicolas Cage performance? Check. Delightfully junky CGI? Check. Eva Mendes and Sam Elliott? Check. Another dreary origin story of a fitfully remembered Marvel B-lister? Sadly, check. Cage’s Chopper is about the only interesting thing in this turkey, which, for reasons even Stan Lee probably can’t fathom, was granted an even crappier sequel in 2012.