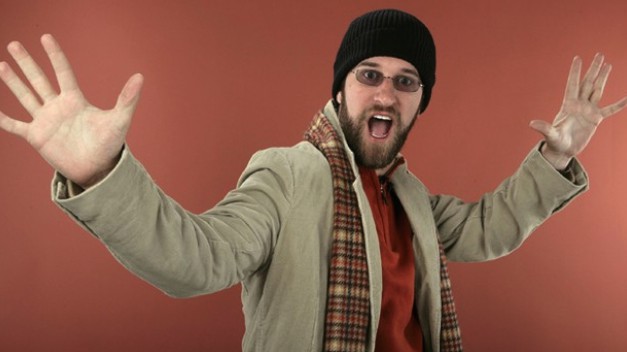 For an entire generation weaned on ’90s television, Dustin Diamond will forever be known as Samuel “Screech” Powers from Saved By The Bell. Not that there’s anything wrong with that—Diamond, who now lives in Wisconsin and makes his living as a full-time stand-up comedian, has learned to embrace his inescapable past, even if the learning curve has sometimes been steep. A string of “heel” performances on reality shows like Celebrity Boxing and Celebrity Fit Club shone a less-than-flattering spotlight on the former child star, as did a tell-all Saved By The Bell book (Behind The Bell), and, yes, a sex tape.

But Diamond claims to have mellowed out in the ensuing years, and is heading into the future by taking inspiration from the past. In advance of his Bayside Bash at Turner Hall Dec. 29—an ’80s and ’90s dance party featuring retro music, video games, and the like—The A.V. Club chatted with Diamond about nostalgia, his many “stunts,” and why Saved By The Bell will eventually go the way of the Gobots.

A.V. Club: First off, how did the Bayside Bash come about?

Dustin Diamond: After I had come off the show, it was difficult to break the monumental size and magnitude of the Screech character. I prided myself on my work—I really enjoyed it, and there were no bad thoughts, but it was difficult as an actor when a role came across my desk that said, “We need someone with great comedic presence, timing, and great facial features that would lend themselves to comedy.” And they were describing me! I’d be into these roles, but I would get the feedback, “Well, we love you, but we just saw too much Screech.” And my only response would be, “Guys, I can’t change my bone structure! This is how I am. What else can I do?”

So that started a trend of trying to distance myself from the character in as many ways as I could. Of course, back then, the Twitter, Instagram, Facebook, and YouTube thing wasn’t as prevalent. So it started this craze of “He doesn’t want to be called Screech! These actors grow bitter about their characters!” But it really had nothing to do with that. It was just that I wanted to be working as an actor.

AVC: The last time we talked to you was 2002. Is it safe to say a lot has happened since then?

DD: After that I did many stunts and many crazy things. The most recent was Celebrity Fit Club, where I played the bad guy. Everybody thought I was so mean after that. But I was supposed to be. It was scripted. It wasn’t easy to play the bad guy. I had to out-crazy Gary Busey. [Laughs] I saw the “TV” aspect of reality TV, and everyone else saw the “reality” aspect. For me, I thought it was a good chance to maybe get on Breaking Bad, or maybe laid out on Dexter’s slab.

AVC: So those stunts are a thing of the past?

DD: As I’ve gotten older and the years have gone on, I’ve mellowed quite a bit. I figure it’s due to the fact that I’m 35, but I’ve been in the business for 27 years. I mean, I’ve been working since I was 8. A lot of my childhood was… not taken from me, but I feel like it was put on hold. And I’m like a big kid now. When other kids were going home and playing with toys and doing homework and going over to a friend’s house to play video games or whatever, I had to go home and prepare for roles and drive an hour-and-a-half after school doing homework in the back seat of a car to go to an audition. I benefited from it, but I feel like it stunted my development. I feel like when I was 25, a lot of the stunts I pulled were because I was like a 15-year-old.

AVC: You were simply acting out later than most people would.

DD: Exactly. And now I’m 35, but I’m more like a 25-year-old, so I’m more mellowed and more settled. It just took a longer time because I was forced to work instead of be a kid. But the positive side of it is that I’m very much in tune with what I call “the 20-year cycle.” I noticed that when I was younger in California, Disney would throw events like “Celebrate the ’50s.” And then they had the disco-era stuff in the ’90s, and then in the ’00s it was “Celebrate the ’80s.” And now that we’re in the teens again, our 20-year cycle is the ’90s. So I tried to break it down: Why are the ’90s so popular right now? I’m a child of the ’90s, and I’m not even taking into account that the show I was lucky to be a part of was such a big, iconic part of everyone else’s ’90s.

So I started having ’90s parties. Everyone wanted to have ’80s parties, but those people were slightly older and that was their time. So these parties started taking off and my friends started loving it. They loved the ’90s playlists I would put on, and they loved the fact that I would show ’90s videos. I noticed that people were digging it so much that they started showing up dressed. A friend of mind said, “You should theme this.” So I started talking to my good buddy Marc Solheim and we ended up brainstorming and coming up with this idea.

AVC: It must be strange to have played such a large part in everybody’s ’90s experience.

DD: For me it was work. I didn’t get to enjoy it the same as everyone else did from a purely spectator standpoint. But over the years, having feedback of how much an impact it’s had on everybody, and being so fortunate to have been a part of it, the Bayside Bash just seemed like a natural fit. If I can have these parties on a larger scale, if I can bring that enjoyment like I do at my smaller gatherings, and if it’s the right time for it, I’m going to bring this on tour for 2013. Once this time passes…this is our window, this is it. We’re not going to be remembering our 20s when we’re in our 40s. It’s not as exciting. All your innocence is from your teens and your young years.

AVC: Back to those stunts from a few years ago. Are they something you regret now?

DD: [Laughs.] Anything you do in your youth, you look back and think, “Oh, man. What was I doing?” But like you pointed out, you act out. I never did crazy stuff when I was a kid, because everything was work. By the time I was 21, I had been a 13-year veteran of working for NBC. Every time you had to contractually show up at an event, you were a representative of NBC. “Don’t embarrass us, you gotta say this, you gotta do this, you have to walk this way, you have to hit these points.” It’s like being a prisoner when you’re a minor. It’s crazy. It was an awesome experience, but no one gives you a rule book to prepare for that when you’re 8, 9, 10 years old.

AVC: Do you see a lot of child actors today and think, “Get out now, kid”?

DD: Yeah. I feel sorry for these kids that are potentially getting big and becoming household names. I think one of the things it has to do with—and this is another reason why the ’90s were so unique—back then, everyone watched the same programs, and if something spread, it was either through a commercial on TV or through word of mouth. It was a shared thing. Nowadays, with Instagram, Twitter, YouTube, Facebook, and all these other forms of social media, everything is saturated so fast. And I think the youth of today are grasping for things to become cool and hip, and then chucking everything else to the side. Just as fast, they’re becoming passé. I think that’s going to have an effect later on. I’m sure the world will keep spinning like it always does, but it means our generation was the last one to sit back and really have all this.

AVC: Are you still working as a stand-up?

AVC: What’s your act like? Do you still slip in some Screech here and there?

DD: Obviously, after 10 years, I’m far more polished than I was. That was back when I was starting out, and jumping ship to a totally new profession when you’re already famous for something else is really hard. Back then, people expected me to be some genius comedian right off the bat, but it doesn’t work that way. Give me a script, and I’ll make you laugh and I’ll do the part, but you can’t just… If I were to suddenly take up tap dancing, I’m not going to be a world-famous tap dancer in a year. It doesn’t work that way. So I got a lot of flak for that in the beginning, but it also was good in that it gave me a hill to climb that I had to either not climb or muscle through. And I muscled through, and here I am 14 years later, still a stand-up. Of course, I throw in Saved By The Bell references right off the bat, just because you have to. There’s no way you cannot. But it’s not my act.

AVC: Do you foresee a time when Saved By The Bell eventually fades away?

DD: Yeah. It was a big show, but like all things after a while… Do you remember Gobots?

AVC: Sure. The Transformers knockoffs.

DD: When was the last time you thought about Gobots?

DD: But there’s a little tickle of, “Yeah, I remember those.” I’m sure that’s where Saved By The Bell is going to fall into at some point. That’s just the nature of things. I just hope that I can get involved in something as big again, or something decently respectable again, that I can take part in as an adult. Sure, I was prominently working there, but I was also 11. I was such a young kid, and I was sort of new to the industry at that point. I cut my teeth there early in those years, but at the same time, as an adult, you’re fine-tuned and refined, and you have more decision-making skills. I would like to be able to do something where I can sit back and really put more into it from an adult perspective.