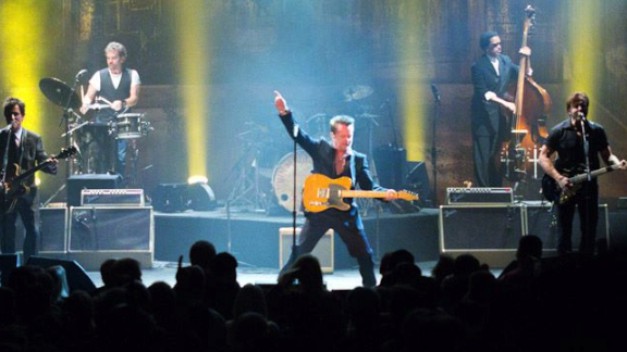 For many folks under the age of 40, John Mellencamp occupies a hazy “Is he any good these days?” territory. Sure, the former Cougar has a garage-full of hits at his disposal, but what is he up to in 2011? Is he merely a nostalgia act? Plugging a new album? Do his videos still conjure up images of tractors and sleeveless T-shirts? Does he still play that “sucking on chili dog” song? More importantly, can the man still rock? Judging from Mellencamp’s stellar two-hour set at the Riverside Theater Wednesday night, the answers to the last five questions are no, yes, no, yes, and hell yes.

Following a screening of a tour doc shot in 2009, It’s About You, Mellencamp took the stage to an expected round of riotous applause. (Fun Fact: Showing a movie that features live performances of songs you’re about to hear is a slightbuzz-kill.) But what wasn’t expected was just how vital and energized Mellencamp and his band seemed to be. Looking dapper and fit in a three-piece suit, Mellencamp immediately kicked off with a lean, slightly sinister “Authority Song.” All of the singer’s monster hits from his 30-plus-year career were dutifully visited (save for “Hurts So Good,” oddly): “Check It Out” sounded triumphant; “Paper In Fire” benefited from a tense and muscular reading; and “Jack & Diane” and “Small Town” made for obvious audience shout-alongs during a mid-set solo-acoustic stretch. Every performance was polished to a fine shine, but rarely seemed rote or perfunctory. Hell, even Mellencamp’s off-kilter, slithery-strut dance moves seemed genuine.

Though billed as the “No Better Than This” tour, Mellencamp selected only three songs—including “No One Cares About Me” and the lovely “Save Some Time To Dream”—from the 2010 T Bone Burnett-produced album of the same name. Meanwhile, four songs were culled from Mellencamp’s 2008 album with Burnett,Life, Death, Love And Freedom. That those newer tracks held their ground so well against the hits spoke well for the singer’s recent re-imagining as a back-to-basics folk-rock act. In particular, No Better standout “Easter Eve”—which tells the apparently true story of Mellencamp and his 14-year-old son caught in the middle of a brawl—stands as one of his best songs in decades.

Still, the night’s main attraction was Mellencamp’s voice, which remains one of the best in rock. Age has only made it a stronger instrument, and it was impressive to witness just how gravelly and pissed-off the singer sounded on songs like “Crumblin’ Down” and “Scarecrow.” There was no encore, though trying to top the one-two-three punch of “Pink Houses,” “R.O.C.K. In The U.S.A.,” and “Cherry Bomb” would seem foolish, if not downright impossible. It was an appropriately frenzied send-off to a night that conjured up anything but images of tractors, sleeveless T-shirts, and, yes, sucking on chili dogs.