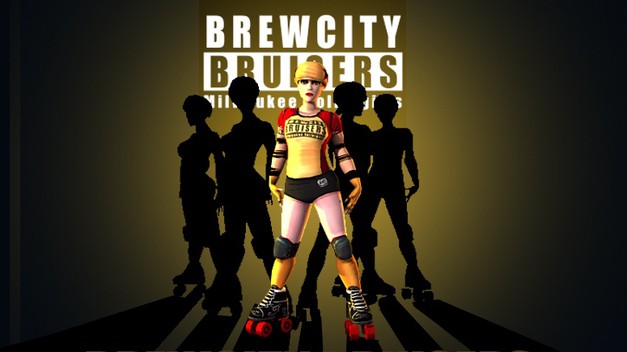 I have a confession to make: I’m not a big fan of roller derby. (Cue the dramatic gasps.) Ever since Milwaukee’s Brewcity Bruisers came on the scene in 2005, I’ve been mystified by the sport. Joke names, impenetrable rules, and a grafted-on pro wrestling vibe? Ugh, no thanks. I’ve been to a handful of bouts over the years, and have left confused, bored, and/or irritated every time. Don’t get me wrong: I don’t begrudge the Bruisers their success, and I’m happy they’ve cultivated such a large, passionate fan base. It’s just that roller derby—along with soccer, NASCAR, and competitive scrapbooking—isn’t really my bag.

But when a video game called Jam City Rollergirls recently appeared on the Nintendo Wii’s online store, I was intrigued. Maybe this was what I needed to finally appreciate the confounding, fishnet-encased sport. After all, my love for baseball and football was originally ignited by video games: the Nintendo classics R.B.I. Baseball and Tecmo Bowl, two games I still enjoy today. (My collection of 8-bit NES carts is somewhere near 400; computer emulation is for babies.) Plus, Jam City includes the Brewcity Bruisers in its five-team lineup, and features the virtual likenesses of past and current players. With an open mind and a few hours to kill, I fired up my Wii, plunked down 10 dollars—er, 1,000 Wii Points—and gave the game a spin.

Jam City is made by Green Bay, Wisconsin’s Frozen Codebase, a small operation that prides itself on its “punk rock” game-designing ethos. (Fun Fact: Frozen Codebase’s sound designer is former Boris The Sprinkler frontman—and derby aficionado—the Rev. Norb.) Five real-life Women’s Flat Track Derby Association teams are represented, including Madison’s Dairyland Dolls and our very own Brewcity Bruisers. Of the Bruisers, you can play as either Becky The Butcher, Grace Killy, Sea Hag, Holly Diver, Servin’ Justice, or Rejected Seoul. (Oh, the wacky names!) You can also create your own character, mixing and matching various body parts from different skaters. I chose Grace Killy’s face, Becky the Butcher’s legs, and, in a nod to that Zack Attack episode of Saved By The Bell, named her Lethal Lisa.

From the get-go, Jam City is an impressive little game. It’s fast-paced, easy to pick up, and remarkably tolerable. The skating is reminiscent of some of the betterTony Hawk titles, and the novelty of playing as a real-life skater is a thrill most derby fans would find irresistible. You can opt for a one-off match against the team of your choice, or go for the long haul with a 10-week season mode. Various power-ups litter the tracks throughout: speed skates; water balloons; and the ability to summon a pack of flaming, undead zombie rollergirls—a rule I fear falls outside of sanctioned league play. It’s all rather goofy, appropriately anarchic, and surprisingly fun.

That’s not to say it doesn’t bear all the hallmarks of a budget title. The controls are a bit wonky, and the need to “waggle” the Wii Remote to perform jumps and computer-assisted “whips” is awkward. The colorful and slightly cell-shaded graphics are serviceable, but wouldn’t feel out of place in a 10-year-old Dreamcast game. And while there’s a local two-player option, the lack of online multiplayer—even in a modest WiiWare game created by some scrappy punk rockers in Green Bay—is inexcusable.

The game’s replay value is also suspect. It takes all of two matches to realize that, well, there’s not a whole lot of depth to Jam City. You pull out in front, become the lead “jammer,” and rack up three or four points. Lather, rinse, repeat. Sure, you can continually upgrade your gear and tweak your appearance (Skull helmets! Skull leggings! Pigtails!), but those improvements bear little weight on the actual gameplay. Four weeks into the season, I gave Lethal Lisa her walking papers, confident she would land on her feet by finding a bartending gig somewhere in Bay View.

Still, the game does succeed in one crucial aspect: It actually taught me how the hell roller derby is played. (Hint: It’s pretty much all about passing other skaters.) For this fact alone, I’m grateful to Jam City. It accomplished in 20 minutes what various friends and exasperated fans couldn’t in five years. Finally, I’m able to appreciate some of the subtleties and strategies of the sport—and there are plenty. Yes, the pro wrestling theatrics still seem tired, and the joke names still bug the shit out of me. (Ms. Behavin’! Annita Lite! PB & Jam!) I’m not quite ready to run out and buy season tickets, but I’m at least willing to give derby—and the Brewcity Bruisers—another shot. Just don’t expect me to trade in my copy of Tecmo Bowl any time soon.