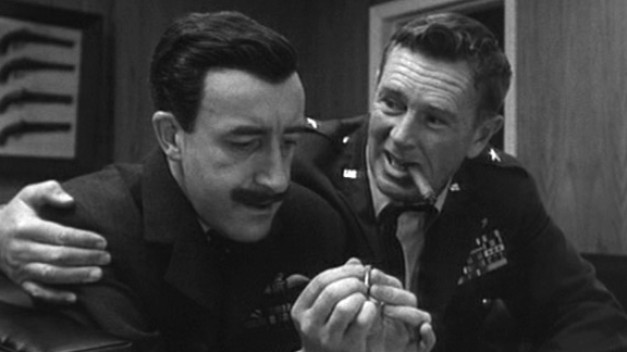 Ald. Jim Bohl and Group Capt. Lionel Mandrake (played by the ghost of Peter Sellers) crouch underneath a desk. Outside, the sounds of gunfire and/or downtown traffic can be heard.

BOHL: Mandrake, do you realize that in addition to fluoridating water, there are studies underway to fluoridate salt, flour, fruit juices, soup, sugar, milk, ice cream. This obsolete, unhealthy practice has to end. That’s why I’m proposing putting an end to Milwaukee’s water fluoridation program.

BOHL: Nineteen hundred and forty-six. 1946, Mandrake. How does that coincide with your post-war Commie conspiracy, huh? It’s incredibly obvious, isn’t it? A foreign substance is introduced into our precious bodily fluids without the knowledge of the individual. If fluoride works topically why are we forcing people to swallow it, especially those who after doing their own research on the issue have emphatically stated that they do not wish to drink fluoridated water? If anyone wants fluoride in Milwaukee they can buy fluoridated toothpaste and brush it onto their teeth and spit it out. Milwaukee shouldn’t be playing either doctor or dentist to our citizens. You can read all about it in my bat-shit crazy press release.

MANDRAKE: Uh, Jim, Jim, listen…tell me, tell me, Jim. When did you first…become…well, develop this theory?

BOHL: Well, I, uh…I…I…first became aware of it, Mandrake, during the physical act of love.

BOHL: I can assure you it has not recurred, Mandrake. Women sense my power and they seek the life essence. I do not avoid women, Mandrake, but I believe we have served as guinea pigs in this ongoing and failed experiment for far too long. In my position as Alderman, it is my duty to promote the health, safety, and welfare of all our residents. Adding fluoride chemicals into our public water supply runs counter to this and therefore needs to end.

Aldermen Bob Donovan and Bob Bauman suddenly burst through the door, struggling over asmall, plastic streetcar. Bohl produces a tinfoil hat from his desk and places it on top of his head. End scene.