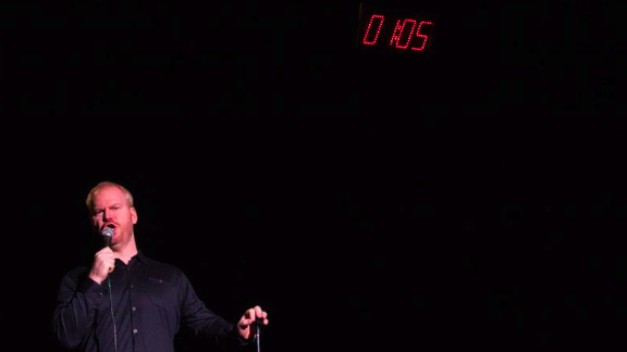 Deep within the bowels of the Pabst Theater, inside a sprawling compound that serves as one part dressing room and one part geeked-out man cave, a buffet was set out for Jim Gaffigan. Sandwiches, pastries, corn dogs (!), champagne, and other goodies sat atop an Alterra-constructed table. On the other side of the room, a clutch of stand-up arcades and a TV hooked up to Super Mario Brothers 3 blinked in silence. But the room’s biggest draw wasn’t the champagne or the video games: In a nod to Gaffigan’s junk food-obsessed comedy, a plate of bacon-and-cream cookies sat quietly on the edge of a table.

Food, of course, is Gaffigan’s metaphorical bread and butter, and one of the subjects he returned to time and time again during Saturday’s sold-out show at the Pabst. The gig marked the Midwestern-born comedian’s fifth time returning to Milwaukee for New Year’s Eve, a neo-tradition perfect for those hoping to avoid the howling, drunken masses, and instead enjoy some jokes about Subway, Dominos, and, yes, Hot Pockets.

Strolling out onto a stage adorned only with an analog and two digital clocks, Gaffigan wasted little time in getting some Milwaukee references out of the way. Mitchell Airport, measuring the passage of time in weight gain, and the similarities between bars at 2 a.m. and nursery schools (yelling, singing, fighting, urinating) all made for perfect opening jabs. From there, he delivered an hour’s worth of mostly new material, touching on some time-tested comedic standbys: hotels (“The 10 Commandments were based on what happened in hotels”), 21st century parenthood (“I have more pictures of my children than my father ever looked at me”), and, of course, an impression of a depressed and body-conscious sperm whale. All throughout, the comedian employed his trademark whispering “inner voice,” a high-pitched running commentary that served as both audience surrogate and Mr. Subliminal-style personal musing.

But the perils of fast food and fast-food lifestyles remained Gaffigan’s forte. Subway and Dominos received their fair share of jabs, as did the behemoth of them all, McDonald’s. Gaffigan isn’t exactly known for biting social commentary—his material is largely PG-rated and observational—though the ubiquitous golden arches and their “child molester clown mascot” teased out some surprising invective. In a short but scathing bit, Gaffigan railed against the sanctimonious anti-McDonald’s crowd, claiming, “Everything is McDonald’s”: tramp stamps, reading Us Weekly, watching Glee. “Knowing the last three people Jennifer Aniston dated is McDonald’s,” said Gaffigan. “Knowing who Prince William married is Burger King.”

With less than 10 minutes left before midnight, Gaffigan finally launched into his signature Hot Pockets routine (“My blessing and my curse”). The bit was a near-word-for-word recitation of the version found on his 2006 album, Beyond The Pale, (on the instructions for Lean Pockets: “Take out of box, place directly in toilet”), but it managed to kill nonetheless. As the final seconds of 2011 ticked away, Gaffigan was joined onstage by his wife (a ranking babe, FYI), and led the crowd in a New Year’s countdown. At the stroke of midnight, balloons fell from the chandeliered Pabst ceiling, strangers and loved ones kissed, and resolutions of conquering one’s own McDonald’s seemed thrillingly within reach, if only for a moment.