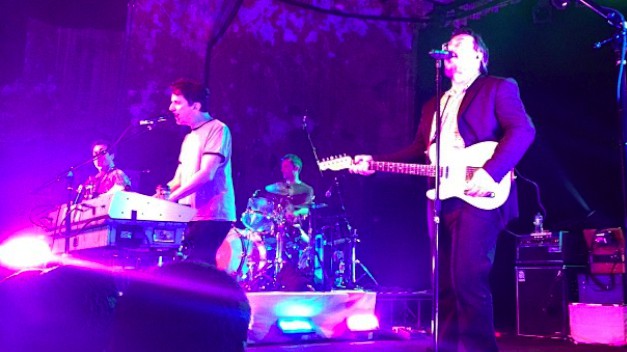 Being a They Might Be Giants fan has never been sexy. The late ’80s and early ’90s found Johns Linnell and Flansburgh at the height of their geek-rock powers—listen no further than 1988’s Lincoln and 1990’s Flood—but their music and fans were relegated to the dreaded “quirky” ghetto. The addition of a backing band beginning with 1994’s John Henry and a slew of kiddie records throughout the ’00s did little to convert the fashionable masses; even a star-studded 2003 documentary, Gigantic (A Tale Of Two Johns), failed to pry the group and its adherents loose from their nerdy pigeonholes. Today, the message is clear: No matter your entry point into They Might Be Giants’ 30-year career, they’re something you love and obsess over only before booze and the opposite sex come calling. To claim a die-hard allegiance to the band post-junior high is to risk the kind of nervous response usually reserved for grown adults who still collect baseball cards.

Die-hard fandom is like that, though: sticking with a band when it’s no longer fashionable—or, in some cases, no longer advisable. Happily, being a They Might Be Giants fan in 2013 is more than advisable, with the Johns riding high on two terrific adult-sized albums (2011’s Join Us and the new Nanobots) that combine their early, wonky charms with their more refined late-career songcraft. Not that the adoring sold-out crowd at Turner Hall Friday night cared about fashion: For fans who have hitched their wagons to They Might Be Giants from the beginning—and for those who have only hopped aboard in recent years—being unfashionable is half the point.

Following a thunderously received opening set from former subway-platform-performers Moon Hooch, the Giants opened their nearly two-hour set with the joyous “When Will You Die?” from Join Us. A stomping, somewhat menacing take on “Ana Ng” soon followed, as did a dutiful run-through of “Istanbul (Not Constantinople).” Later, a surprising amount of time was given over to Nanobots tracks like “You’re On Fire,” “Circular Karate Chop,” and the appropriately titled ode to Nikola Tesla, “Tesla.” It was a testament to the band’s enduring appeal to new generations of teenagers that many of these new songs drew just as much applause as the stone-cold classics. (The show had a strict 14+ age limit, a peculiar cutoff you’re only likely to encounter with TMBG.)

Still, there were plenty of unexpected treats for longtime fans. A Johns-only performance of “How Can I Sing Like A Girl?”—accompanied by Linnell on accordion—proved quietly poignant, while a full-band rendition of the bittersweet “Dead” was the closest thing the show had to a lighter-hoisting slow-jam moment. A melancholy deep-cut from 2004’s The Spine, “Memo To Human Resources,” provided a relatively somber pause, though the dual-sock-puppets-in-front-of-a-video-camera shtick—long a staple of They Might Be Giants’ stage show—was reliably hilarious, skewering not-so-sacred cows like gun lovers, Zune lovers, and touring bands who attempt to sprinkle their shows with local references.

Throughout the night, the band’s obsessive-compulsive, long-set-in-stone dynamic was on full display: Flansburgh as the salesman, busily traversing the stage and serving up “Ladies and gentlemen!” chatter to the crowd; Linnell as the bemused brains of the operation, constantly futzing with his keyboard and taking the occasional sip of coffee. After noting he had sang “The Guitar (The Lion Sleeps Tonight)” approximately “five…million times,” Linnell charmingly offered up TMI about the difference between singing “spaceship” versus “space ship.” The entire band, meanwhile, copped to obsessing over the downward slope of Turner Hall’s historic stage. Later, after Linnell finished wielding a bass clarinet for “Cloisonné,” it came as no surprise that Flansburgh dedicated the entire show to the ridiculous instrument. (Even less surprising, he did it in a robot voice.)

Two encores capped off the evening, nicely encapsulating the Giants’ three-decade career. The new “Tesla” kicked off the first, and 1989’s still-delightful “We’re The Replacements” headed up the second. For die-hard fans, this whirlwind retrospective was a pitch-perfect reminder of what makes They Might Be Giants so special. For newcomers, it was the beginning of a beautiful—and gloriously unfashionable—friendship.