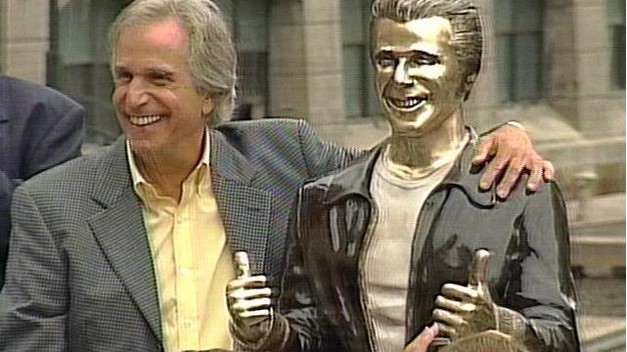 Take yourself back to the summer of 2008: The Obama/McCain race for the White House is in full swing, The Sisterhood Of The Traveling Pants 2 is packing multiplexes, and the New Kids On The Block are dominating the airwaves with the stunning comeback single “Summertime.” Meanwhile, in downtown Milwaukee, a highly contentious bronze statue of TV’s Arthur Herbert Fonzarelli is being unveiled, capping off a yearlong controversy that pitted Milwaukeean vs. Milwaukeean in a battle for the city’s very soul.

Two and a half years later, it’s hard to remember what all the fuss was about.

A brief refresher: In late ’07, a convention and visitors bureau known as VISIT Milwaukee announced plans to erect a bronze statue of the iconic character in the downtown area. (Because, you know, Happy Days was supposed to have taken place in Milwaukee or something.) David Fantle, vice president of public relations for VISIT Milwaukee, was one of the champions of the project; Mike Brenner, a local artist and proprietor of Riverwest’s Hotcakes Gallery, was vehemently opposed to it. At the heart of the controversy was the question of Milwaukee’s image. “For a couple years, all of us running venues started to notice a shift—visitors starting to ask about Milwaukee’s underground music and arts scene,” Brenner remembers. “Then in two months, $85,000 was raised for the Bronze Fonz and our efforts were pushed back 10 years. It was a big slap in the face.”

One of the most fascinating aspects of the Bronze Fonz drama was the culture war it ignited. Local media quickly divided folks into two opposing, cartoonish camps: the uptight, faux-intellectual artsy types who considered the project tacky and insulting; and the mouth-breathing boobs who sympathized with the clueless civic boosters behind it. When Brenner publicly threatened to close his gallery if the statue were actually built, things got even more heated. Harsh words were exchanged, and threats were made. (Brenner later collected a series of threatening voicemails and set them to music.) When the bizarre, TV Land-fueled firestorm reached its peak, Brenner made good on his promise, and closed the doors to Hotcakes on July 3, 2008.

A little more than a month later, on August 19, the Bronze Fonz was officially dedicated; former cast members of Happy Days—including a clearly bemused Henry Winkler—even showed up to press the flesh. In the months that followed, VISIT Milwaukee won a 2009 Destiny Award from the National Council Of Destination Organizations, and a gold medal from the Society Of American Travel Writers for “best publicity campaign for a convention and visitors bureau.” Pictures of Milwaukee natives and tourists alike posing with the grinning bronze visage became commonplace, and when it wasn’t being kissed, fondled, or mounted, the statue was known to catch the attentions of various attention-starved YouTube vloggers.

Still, the pint-sized monument to ’50s-by-way-of-’70s cool was far from the “whimsical” attraction it was intended to be. For starters, it was—and continues to be—kind of creepy. Fonzie’s face seems tight and pinched, and his smile alone could haunt the waking dreams of even the most hardened juvenile delinquent. The statue’s size also seems a bit off, as if the leather-clad Fonz spends his nights in those not quite life-sized, not quite miniaturized houses in the Public Museum’s Streets Of Old Milwaukee exhibit. And while VISIT Milwaukee claimed the Bronze Fonz provided “the perfect pop culture photo opportunity,” a page on the group’s website showcasing those photos seems to have been taken down.

The key players in the drama eventually moved on. David Fantle recently left VISIT Milwaukee and accepted a position as deputy secretary for the Wisconsin Department Of Tourism. Brenner redirected his energies toward beer, and has been studying to become a Master Brewer. “Now that the death threats have stopped, I don’t even think about the Bronze Fonz anymore,” he recently told The A.V. Club. “But if somebody tossed that thing into the river, they would definitely get a lifetime supply of beer from the Brenner Brewing Co.”

Like Brenner, Milwaukee seems to have left the controversy behind. Far from the hotly contested piece of public art that once threatened to make or break a city, the statue is now nothing more than a kitschy novelty best suited to tourists and drunken bridal parties—an $85,000, non-moving, non-ride-able version of La Perla’s mechanical pepper. And if revisiting the uproar after two and a half years makes little sense, it’s only because nothing in the ridiculous Bonze Fonz saga ever did.