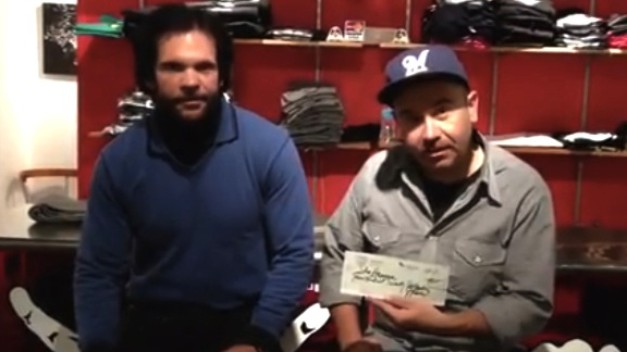 In his 1970 myth-busting song “God,” John Lennon sings, “I was The Walrus, / but now I’m John.” The same sentiment could apply to Milwaukee’s “Milverine,” a famed local character who put his X-Men-inspired moniker to rest Friday night at the Too Much Metal showroom and officially came out as a dude named, well, John. Never mind that the oft-shirtless power-walker—real name John Hamann—professed a deep dislike for all things Beatles during the informal meet-and-greet. (He prefers opera and cage fighting.) The Milverine dream is over. What can you say?

Far from the cringe-inducing fiasco many had feared, Friday’s event was exceedingly normal, and even downright pleasant. Joined by Too Much Metal’s Fred Gillich, Hamann stood around, shot the shit with some curious strangers, answered some questions from a gaggle of cub reporters (“Do you think your newfound fame will help your fighting career?”), and signed some T-shirts. Since the coming-out party coincided with fall Gallery Night, a steady stream of well-heeled rubberneckers filed in and out of the Too Much Metal doors, many of them walking away with their very own Milverine T-shirt. (All proceeds were given to Hamann.) Throughout it all, Hamann remained low-key and friendly, and came across as nothing more than a normal, somewhat eccentric dude (he really loves his opera) who happens to kinda-sorta look like X-Men-era Hugh Jackman. (“He wouldn’t stand a chance against me.”)

In the post-game wrap-up video, Gillich presents The Artist Formerly Known As Milverine with a check for $420, and even gives a shout-out to The Onion/A.V. Club. (Gillich paid tribute to our extensive Milverine coverage with a shelf of onions emblazoned with words like “juvenile” and “yellow.” Um, thanks?) In an accompanying blog post, Gillich writes:

The next time you see John walking the streets of Old Milwaukee, be sure to greet him with a hello—he’d like that. The “Milverine” is more than a walking legend, a romance-novel fantasy, or a myth. John is a man. John is the Man. So do yourself a favor (be a man or a woman) and make a new friend.

In other words: The dream is over, and it’s about time.