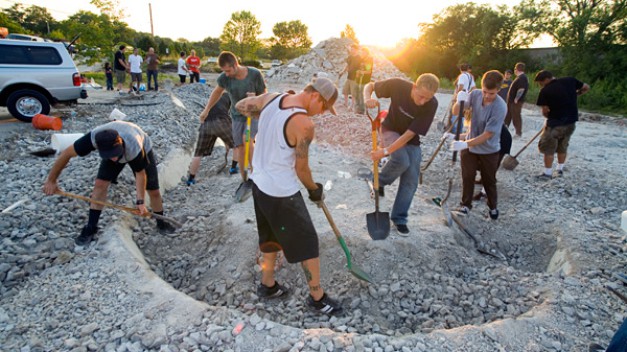 It’s a story that only Fox 6 News and/or Thrasher Magazine could bring you: Earlier this week, construction near U.S. 94 and Loomis Road uncovered the ghostly remains of Milwaukee’s long-defunct Turf Skatepark. The park, which opened in the late 1970s and stayed popular throughout the ’80s and early ’90s, was once home to the Midwest’s first and finest concrete skating bowls. When the building was sold off to a lawn and garden company in 1994, The Turf’s once-mighty bowls were filled with rocks and covered in concrete.

But when construction crews demolished the building to make way for a freeway expansion, they made a surprising discovery: the gravel-filled footprints of the still-intact Turf bowls. Word quickly spread through the Milwaukee skating community, and by Tuesday, an army of sweaty volunteers was digging out the rubble. “The scene was incredible,” Beer City Skateboards’ Mike Beer told The A.V. Club. “About 30 or more skaters were all working together with one simple goal: We wanted to skate the park again.”

In a surprisingly lengthy report Wednesday night, Fox 6 literally shone a spotlight on the archaeological excavation, with on-site reporter Mike Lowe describing the scene to a strangely fascinated Brad Hicks. (Anyone know if a younger, gnarlier version of Hicks used to frequent The Turf back in the day?) But the glowing media exposure came at a price: Not long after the Fox 6 report, police showed up and rousted the shovel-wielding skaters from the site. By Thursday afternoon, the park was lost for a second time. “Some guys got out there very early and got to skate it for around an hour,” says Josh Ellis of WiSkate.com. “The cops then showed up, gave them the boot, and the contractors filled the thing right back up with gravel.”

What happens next is tantalizingly unclear. A follow-up story from Fox 6 notes that the freeway expansion isn’t scheduled until 2013, giving skaters plenty of time to “Save The Turf.” A couple of popular Facebook pages have sprung up, and a rally is planned for the near future. No matter what becomes of the former skatepark, its brief resurrection is something of a dream come true. “The long-running answer to ‘If I won the lottery’ amongst Milwaukee skateboarders was always ‘Buy the building The Turf was in and dig up the bowls,’” says Ellis. “It was kind of mind blowing that the joke had become reality.”