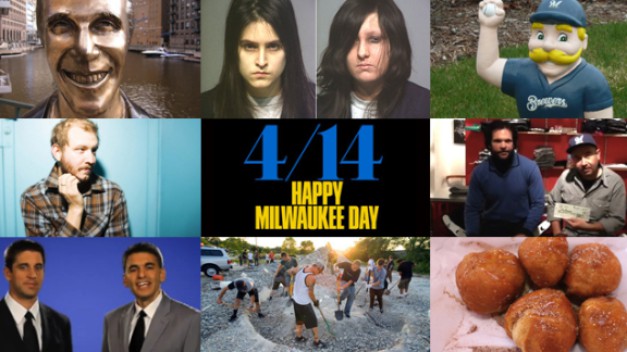 2011 was a tumultuous year for Milwaukee, Wisconsin, and the country as a whole. But instead of dwelling on politics and all things “Occupy,” we prefer to remember the year for its more mundane and dopey moments. Here are a few of our favorite news stories from 2011, ranging from haunted hotels and stolen lawn ornaments to fake holidays and—sigh—dudes who look like Wolverine.

January
The big story: Whoa! Joey Lawrence haunted by Pfister Hotel ghost
On an episode of Celebrity Ghost Stories, none other than former Blossomheartthrob Joey Lawrence recounted a terrifying visit to Milwaukee’s Pfister Hotel. While nodding off in one of the Pfister’s rooms, the onetime Gimme A Break! moppet was awoken twice by the sounds and lights from his daughter’s toys. Later, the room’s bathroom light inexplicably turned on. Of course, Lawrence concluded that this low-level carnage could only have been the work of the restless undead. To quote Ghostbusters’ Dr. Peter Venkman, when faced with a “supernatural” stack of books: “You’re right, no human being would stack books like this.”
Other stories: Milwaukeeans donate $10 to the Wisconsin Humane Society for every time the Packers sack Michael Vick

February
The big story: The Packers win the Super Bowl!
Yes, it really happened: Despite a banged-up roster, Christina Aguilera, and a halftime show courtesy of the Black Eyed Peas (belch), your Green Bay Packers handily defeated the Pittsburgh Steelers in Super Bowl XLV. Sadly, the afterglow was tragically short-lived, thanks to a certain boy-Governor who will perhaps appear again on this list. No matter: The team is almost certainly headed to the big game again this year. Prepare your tender dude-hugs now.
Other stories: The Brew City Bruisers are featured in the Jam City Rollergirls Wii game

March
The big story: Gov. Walker cuts state poet laureate position, saves $2,000
One of the more contentious provisions in Gov. Scott Walker’s otherwise well-received budget plan was the elimination of the Wisconsin State Poet Laureate. The position was created in 2000 by noted free-verse enthusiast Tommy Thompson, and subsequently renewed by Jim Doyle, who may or may not have studied under the late Ted Berrigan in the early ’70s. In the past, this nefarious, beret-clad program bilked Wisconsin taxpayers to the tune of a cool $2,000 a year, and put them in dangerous proximity of folks who were thinking about releasing a chapbook sometime in the spring. No longer, proud Wisconsinites. No longer.
Other stories: WMSE celebrates its 30th birthday

April
The big story: Hey, Milwaukee, guess what day it is? (Hint: Milwaukee Day!)
On April 14, Milwaukee celebrated Milwaukee Day. While the suggested festivities were certainly worthwhile (“shop local, post videos of Milwaukee bands, share stories of how we all helped each other through the Cryptosporidium plague of 1993”), an actual Milwaukee Day-certified party is currently being planned for 2012. According to one of the organizers (and A.V. Club contributor), Brent Gohde, it’s going to be a doozy. “What happens on April 14, 2012 is really up to the people of Milwaukee. For our part, we’re planning a freakin’ huge party, unique in that it will feature music, food, and beverages. Everyone’s invited.”
Other stories: Lil’ Wayne defaces the Bronze Fonz (sort of)

May
The big story: “Gnomegate”
Call it the day we lost our innocence as a united Brewers nation. Call it the day Bernie Brewer died, or the day we were reminded of the existence of horrible things like overzealous fans and eBay. Yes, “Gnomegate” tore out our swelling hearts back in May. What was supposed to have been an innocent scavenger hunt for some mustachioed Bernie Brewer lawn ornaments quickly turned sour when a local woman reportedly nabbed more than 30 of the statues and bragged about it online. The story made local and national news, and children wept in the streets at 3 a.m.
Other stories: Journal Sentinel requires registration for its online commenters (finally)

June
The big story: Deep-fried butter
Two weeks before the start of the Wisconsin State Fair, it was time to discover what new, increasingly unlikely deep-fried gunk we’d be stuffing down our pie holes. Yes, much like Pamplona’s annual running of the bulls or your annual cholesterol workup, the first State Fair deep-fried announcement is a time-honored tradition that keeps getting better—and more hazardous to your health—year after year. And this year’s opening salvo was a doozy: deep-fried butter. Good thing the butter bombshell was the only thing of note that happened at this year’s Fair. Right?
Other stories: Mike Brenner sticks it to the Chinese by shaving off his hair in front of the Milwaukee Art Museum; We celebrate Summerfest with our Dramatic Reading Series

July
The big story: Aaron Rodgers and David Gruber would like to talk to you about auto insurance
It was only a matter of time before Milwaukee’s answer to Breaking Bad’s Saul Goodman teamed up with another area superstar. But we were more than a little surprised when we discovered who that superstar turned out to be: Green Bay Packers quarterback Aaron Rodgers. Yes, the man who took home a Super Bowl XLV ring could suddenly be seen with the man who took home a 2010 Shepherd Express Readers’ Choice Award for Best Personal Injury Lawyer.
Other stories: Hey Milwaukee, guess what tomorrow is? Yup, it’s “Bon Iver Day”

August
The big story: “Save The Turf” movement gets a little help from Pearl Jam
In 2010, we brought you the story of the Turf, a legendary skatepark that was unearthed by Greenfield construction crews and briefly resurrected by area skaters. Though the park was quickly buried again, aging skate-rats hoping to relive their Thrasher-rific pasts established the Save The Turf Foundation, which garnered the support of folks like pro skater Lance Mountain and Tony Hawk’s Pro Skater 3’s Tony Hawk. After months of apparent inactivity, the movement received a huge boost in 2011 from another high-profile fan: Pearl Jam bassist Jeff Ament.
Other stories: State Fair will honor the sanctity of marriage this year with “doggie weddings”

September
The big story: So long, Cool TV, and thanks for all the Styx
Let’s take a moment to remember The Cool TV, the dearly departed music video station that bucked the system by actually playing music videos. Sure, those videos may not have exactly been top-shelf, but if you were looking for a live Human League performance from 1997, that one Ke$ha video from a few years ago, or anything by Phil Collins, you could have done a lot worse. Sadly, The Cool TV’s less-than-cool days were numbered in 2011. We guess playing old Stryper videos around the clock didn’t exactly pay the bills.
Other stories: Harley-Davidson and AJ Bombers honored for excellence in having Twitter accounts; Leggy new Dum Dum Girls video has Milwaukee ties, legs

October
The big story: Requiem for a Milverine
In his 1970 myth-busting song “God,” John Lennon sang, “I was The Walrus, / but now I’m John.” The same sentiment could have applied to Milwaukee’s “Milverine,” a famed local character who put his X-Men-inspired moniker to rest in October, and officially came out as a dude named, well, John. Never mind that the oft-shirtless power-walker—real name John Hamann—professed a deep dislike for all things Beatles during his informal meet-and-greet at the Too Much Metal showroom. (He prefers opera and cage fighting.) Yes, after the years of fun and mystery, the Milverine dream finally came to end. Thank God.
Other stories: Milwaukee gets involved in Seattle’s “real life superhero” controversy

November
The big story: So, about that satanic werewolf-spirit-sex-stabbing thing on the East Side …
Milwaukee’s East Side made national news in late 2011 with the story of two women who tied up an 18-year-old man they had met online (natch), just so they could have sex with him for two days straight. Oh, and they cut him 300 times and pretended they were satanic werewolves or something. Yes, it was a story only a frustrated Ginger Snaps fan-fic writer could imagine, and one of the most bizarre w4m hookups in years.
Other stories: The Promise Ring announces reunion shows, rarities album

December
The big story: Bon Iver’s four Grammy noms to baffle teens and Rosie O’Donnells nationwide
The big semi-local news from the 2011 Grammy nomination ceremony was that Eau Claire’s own Bon Iver was nominated for four awards. Of course, many are speculating that should Bon Iver actually win an award, the less-than-household-name band will serve as this year’s Arcade Fire. That indie band netted an Album Of The Year award at the 2011 Grammys, much to the confusion of Twittering teens and bleeding-edge celebs like Rosie O’Donnell. (O’Donnell tweeted “album of the year? ummm never heard of them ever” following Arcade Fire’s win.)
Other stories: Rosie O’Donnell on Bon Iver: “a tad redundant” and “good music for making dinner”