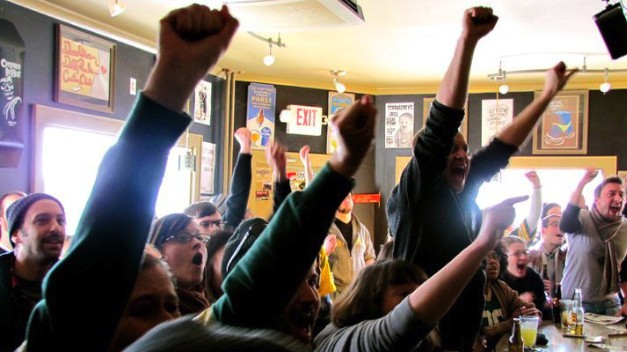 If there’s one thing Milwaukee is good at, it’s patting itself on the back. Open a local paper or click on a local website and you’re bound to run into dozens of “Best of” and “Best of the best” awards. And why not? Milwaukee is loaded with countless people, places, and events worth celebrating. The Randoms do the same thing, but without all the tedious popularity voting and web browser cookie-clearing. Instead, we simply create arbitrary categories and single out one noteworthy local institution every Friday afternoon. Who will win for Best Riverwest Club With Nine Letters In Its Name? Best Bay View Restaurant On The East Side Of KK? Find out as we begin handing out awards to every man, woman, child, bar, and farm-to-table restaurant in Milwaukee.

Best Bay View Bar To Watch The Packers And Hear “The Power Of Love” After Every Packers Touchdown: Cactus Club

Since the glorious 2010-11 season that saw the Green Bay Packers defeat the Pittsburgh Steelers in Super Bowl XLV, the venerable Bay View rock club has been the go-to destination for those who enjoy a little raucous, ridiculous fun with their football. Not content to simply turn on a few flatscreens and put out some extra bar pretzels, the Cactus Club does it up right. Don’t like listening to commercials? Good, because the Cactus Club blasts everything from Pantera to “Weird Al” during the commercial breaks. Sick of hearing Joe Buck and Troy Aikman blathering on about God-knows-what? The Cactus Club isn’t above piping in some goofy “SHUT THE FUCK UP!” sound effects over the P.A. And, most importantly, do you long to hear the inspiring synths and upbeat lyrics of Huey Lewis’ 1985 hit single “The Power Of Love” after every Packers touchdown? You’re in luck, because the Cactus Club does just that. Every. Single. Time. (A new tradition of playing terrible songs—i.e. “Mambo No. 5”—after every opposing touchdown is equally delightful.)

This revelry comes courtesy of longtime Cactus bartender Chris Schulist, who presides over each game like a grinning, wicked puppet master. Wielding a soundboard and a loaded laptop (kind of like that guy on Jerry Springer who used to play zany sound effects every time the guests fought), Schulist transforms each three-hour contest into something bordering on performance art. And lest you think this wonky weekly ritual falls under the dreaded “hipsters liking sports” thing, think again. There’s nothing but genuine love, affection, and passion radiating from the folks who gather each Sunday to watch the Green and Gold stomp their way to victory. Toss in the usual touchdown shots, free brats courtesy of Cactus owner Eric Uecke, and some accommodating game-day bleacher seating, and you have one of the best Packers experiences in town. Also: Grow up. Enough with that lame anti-“hipster” shit already.

So congratulations, Cactus Club! May you forever reign as the Best Bay View Bar To Watch The Packers And Hear “The Power Of Love” After Every Packers Touchdown. SHOTS!