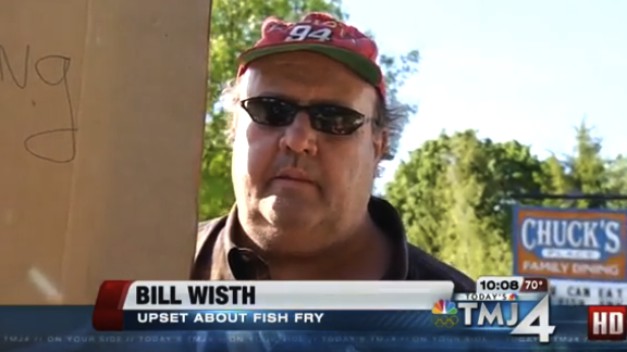 If Wisconsin recall-fever has some residents wishing they lived in a less contentious place like North Carolina and/or Iraq, nearly every news station in the state has a delightful distraction. A Mequon man who is shockingly not named Homer Simpson is currently picketing a family-run restaurant that is shockingly not named The Frying Dutchman because of “false advertising” for its all-you-can-eat Friday night fish fries. It seems that Bill Wisth (who, as TMJ informs us, is 6 foot 6 inches tall and weighs 350 pounds) recently became upset when the staff at Chuck’s Place cut him off after he scarfed down 20 pieces of fish. Wisth claims he was still hungry, and that the restaurant’s all-you-can-eat policy entitled him to, well, all he could eat. Chuck’s Place didn’t budge, however, resulting in Wisth refusing to pay his bill, calling the police, and Wisth eventually getting kicked the fuck out by the same police.

So what’s a totally sane, 350-pound dude who loves fish fry left to do? Boycott the restaurant, of course. Wisth is planning on picketing Chuck’s Place every weekend from now until the end of time, because “people have to stand up for consumers,” or something. Yes, this is the way the world ends: not with a bang, but with a Simpsons episode come to life. And a side-order of rye bread and coleslaw.

(In Wisth’s defense, he does compliment Chuck’s Place on its deep-dish pizza. Someone get this dude a Yelp account, STAT.)