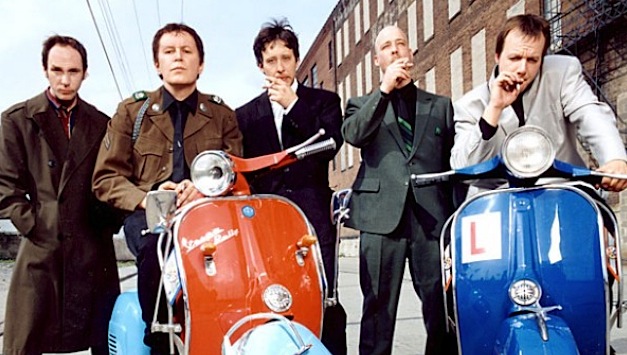 It should come as no surprise to the disciples of songwriting automaton Robert Pollard that the reunited “classic lineup” of Guided By Voices has released nearly as many records as its original ’93-’96 incarnation. Equally unsurprising is the fact that the 21st century Classic Coke version of the band has accomplished this feat in roughly half the time it took the original formula. What is surprising is the relative quality of the new records: Let’s Go Eat The Factory, Class Clown Spots A UFO, andThe Bears For Lunch—all from 2012—found Pollard and company churning out agreeably lo-fi nuggets reminiscent of their ’90s output, albeit with a slightly less forgiving hit-to-miss ratio. The new English Little League continues that even-keel trend, and goes a long way in setting the group’s new/old lineup in stone. It may be for diehards only, but what Guided By Voices album isn’t?

Pollard is clearly the architect behind GBV’s current crop of comeback albums, but it’s Tobin Sprout who once again walks away with MVP honors. “(Island) She Talks In Rainbows” plays like a more resigned, ’60s-tinged version of Cheap Trick’s “Surrender,” and the lovely, stumbling, piano-driven “The Sudden Death Of Epstein’s Ways” is undoubtedly Little League’s strongest moment. Pollard contributes a few reliably solid tracks throughout, including opener “Xeno Pariah,” which borrows the polished crunch and strut of the band’s 2001 album Isolation Drills. “Trash Can Full Of Nails” is the sort of tossed-off gem that Pollard excels at—weird, hooky, and completely nonsensical—while “Send To Celeste (And The Cosmic Athletes)” finds the frontman comfortably kicking back in beer-and-lighter-hoisting mode.

Pollard recently installed a recording studio in his house, and the resulting tracks—the creeping, sub-lo-fi “A Burning Glass,” for one—suggest that it will now be even easier for Uncle Bob to wake up, shuffle out of bed, and record four new albums before lunch. As such, English Little League is decidedly overstuffed at 17 songs, and the one-off sketches that were somehow endearing on albums like Bee Thousandand Alien Lanes come off as simply filler here. Still, it remains a pleasure to hear GBV doing what it does best: cranking out song after song. Like Classic Coke, it may be time for the band to drop the “classic” from its name; this is simply Guided By Voices, as God and Pollard intended.