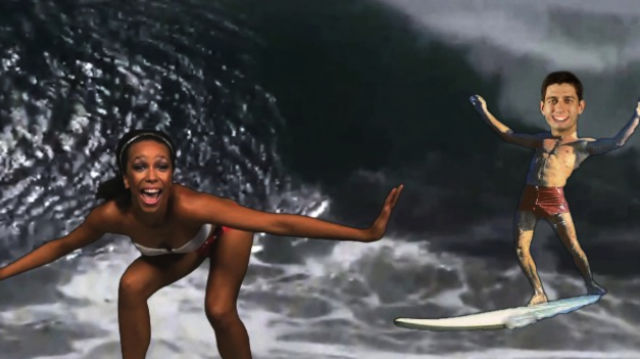 One of the greatest hurdles for modern Republicans is connecting with young people. Lacking the rock-star qualities of an Obama, Clinton, Kennedy, or Grover Cleveland, conservative candidates are often seen as the very antithesis of skateboard-riding, Jolt-drinking, Napster-using 20-somethings. That disconnect can be troubling for GOP officials, but it can be unintentionally hilarious for the rest of us. Take “Do The Paul Ryan,” a YouTube song/video that attempts to capitalize on the “Obama girl” craze of yesteryear with predictably horrifying results.

There’s not much to say about the song itself—it’s pretty awful, and it contains lines like “I’m hoping for a change and feeling kind of steamy / Never had a veep who’s been so dreamy,” and “Camelot’s back and Reagan’s really proud.” But it’s the website that the video is associated with that moves “Do The Paul Ryan” across the aisle from harmless to unintentionally hilarious. Stick around until the end of the song and you’ll find a link to HotOrNot2012.com, an adorably clunky site that pits the rugged “hotness” of Vice President Joe Biden against the somewhat-jaundiced “hotness” of VP hopeful Ryan. The project is the brainchild of The National 912 PAC, a group that was formed “to emphasize a new brand of Conservatism that crosses traditional social and economic boundaries, and to remind people what it is to be an American.” Apparently, that reminder includes reviving the Internet’s ancient “Hot or not?” meme and making one of those “viral” videos the kids are so gaga about these days. Sadly, opportunities to sign a guestbook or link to the official Buffy WebRing are not included.