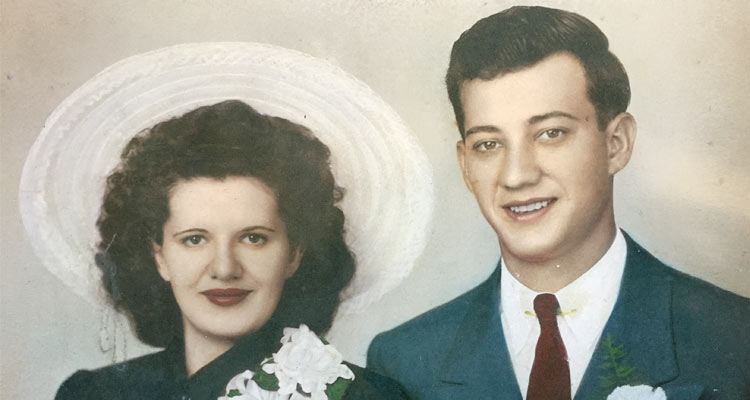 The story goes that as my mom, pregnant with me, was going into labor at the hospital in Fond du Lac, my dad was, what else, playing hockey in Kekoskee. News of my imminent birth somehow made its way to grandpa and grandma’s house, and so, as one did in the days before cell phones, Grandpa drove over to the hockey rink to alert my dad. According to my dad, the second he saw grandpa’s car coming down that steep hockey rink hill he knew something was up. “Uh oh,” my dad thought. “It’s time,” grandpa said. The rest of the story—of how my dad’s car couldn’t make it up that hill, and how the game had to be stopped so both teams could push his car up it—is probably best left for another time.

Bearer of baby news and interrupter of hockey games weren’t the only unique jobs grandpa had in his lifetime. Just earlier that year, in 1977, he and grandma closed the doors on the bar they had owned and operated since 1969, Wild’s Borderline Refuge. From there, they went on to work at a series of summer camps as year-round custodians. I’m sure all of us, especially us grandkids, have fond memories of those camps. They weren’t just places grandpa and grandma worked and lived. They were our summer camps, our summer getaways.

First there was Camp Interlacken in Eagle River. My memories are fuzzy, but I do remember swinging on a big swing in the front yard, feeding raccoons in the back yard, and all of us roller-skating in a huge, empty banquet hall. Oh, and me falling off a jungle gym and badly cutting my arm on an exposed screw. There were no doctors for miles, so grandpa and grandma, and my mom and dad, took me to a local veterinarian who sewed me up the best he could. Those were the kind of “What I did on my summer vacation” stories you got after spending a few weeks up north with grandpa and grandma.

Next was Camp Talaki, in Wild Rose, home of that big hall with the hot tub. Oh yes, that hot tub. Honestly, that hot tub looms so large in my memory that it’s hard to remember anything else about Camp Talaki, though I can still picture grandpa driving us around in that Cushman cart of his, taking us on errands through the camp, maybe letting us drive a little.

Finally there was Camp Windego, a Girl Scout camp. My memories are strong of Camp Windego: helping grandpa set up those giant canvas tents in late spring, tooling around in a paddleboat and swimming near the sandbar in summer, messing around in grandpa’s workshop in that huge art barn. But mostly I remember having an entire campground to ourselves, sometimes for a week or longer. It was a perfect place to explore, to play, to be kids. How many people can say they actually looked forward to spending a week with their grandparents?

And of course there was always grandpa and grandma’s house in Kekoskee, where they would return after their final season of camp. Holidays at the house were always the best, with what seemed like all 8,000 of us crammed inside. Here, grandpa was the player of cards, the watcher of the Packers, the giver of the two-dollar bills, the instigator of rousing games of “Hide the Soap” in the basement. Seriously, how brilliant and weird and hilarious was “Hide the Soap”?

All of that is gone now, but we all have our memories, and I suppose that’s what counts in the end. As for those memories, my favorite memory of grandpa is this: It was wintertime at Camp Windego, and my brothers and I had built a sled run outside the house that started in the driveway, went down a hill, hit a huge jump, and then plummeted at a ridiculously steep angle down to the frozen lake below. We were taking a break and warming ourselves up in the house when we saw grandpa outside, carrying a watering can, chuckling to himself, and sprinkling water on our sled run in hopes of covering it with ice and making an already insanely dangerous track even more insanely dangerous. I’ll never forget that smile on his face. Maybe he was remembering his own childhood. Maybe he was remembering that icy day, years ago, when he told my dad it was time.

I’m so glad grandpa announced my arrival as I entered this world. Here’s hoping I can repay the favor as he departs.