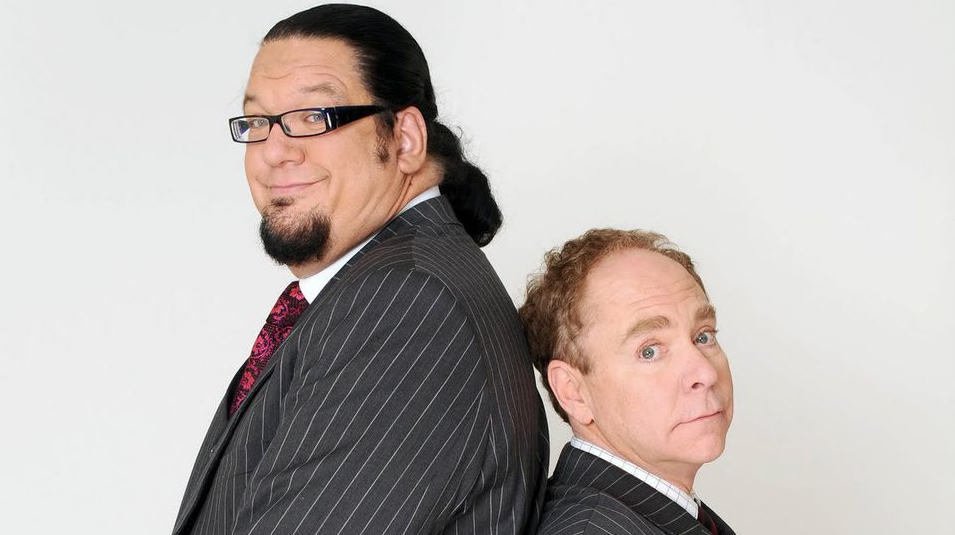 Why it’s daunting: It’s not terribly controversial to say that magicians are, well, kind of geeky. Taking on the title of the “Bad Boys Of Magic,” then, would seem faintly ridiculous, like calling yourself the “Badass Of The Madrigal Dinner.” But for Penn Jillette and Raymond Teller, it’s a title that nicely sums up a wildly successful and surprisingly mainstream career. Combining comedy and magic with a punk-like, “fuck-the-establishment” flair, Penn (the taller, louder one) and Teller (the mostly silent one) have carved out a living by gleefully stomping on the geeky conventions of their craft, while at the same time remaining true to magic’s roots. Their willfully unpredictable, sometimes messy body of work has spanned nearly 30 years and has crossed over into film, television, music, art, books, and even video games. It’s a lot to digest, and that’s not even taking into account their standing as icons of the oft-insufferable skeptical community. Making things even more daunting when reconsidering the duo’s career is their increasingly outspoken libertarian views, which tend to overshadow the very things that made them such a unique, smartly subversive concern in the first place.

Why: At their very core, Penn and Teller are old-fashioned con men, eager to fool and delight their audience by lying through their teeth. Their early reputation as the “Bad Boys Of Magic” was predicated on the idea that they were cheerfully breaking the unspoken Magician’s Code and revealing the secrets behind their tricks and illusions. Of course, that was a lie, too, and their seemingly secret-shattering tricks often led to more questions than answers. Their act was—and still is—essentially a lie within a lie, all masquerading as the truth.

That subversive approach to magic made Penn and Teller uniquely equipped to call out other con men on their own lies. Rational thinking and skepticism had always been components of their act, but it wasn’t until Bullshit! premiered on Showtime in 2003 that they took center stage. Phony psychics, alternative medicine hucksters, self-help gurus, and alien nuts would be the targets of Bullshit!’s highly entertaining, highly vulgar ire. And who better to call out the world’s charlatans than a couple of wise-ass magicians who made their living fooling their fans? Penn lays out the show’s “fighting bullshit with bullshit” ethos in the opening of the first episode, “Talking To The Dead”: “We’re going to hunt down as many purveyors of bullshit as we can. Sure, we lie, cheat, and swindle; we’ve been known to deal in a bit of bullshit ourselves. So some of you may ask, why pee on someone else’s parade? One important difference: We tell you we’re lying.”

That fine bit of distinction permeates the first season of Bullshit!—at least we’re honest about our dishonesty!—and the first few episodes are indeed doozies: spirit-channeling mediums, alt-medicine quacks, and UFO convention attendees all get equally skewered. Even better, they get skewered in the most ridiculous ways possible. When the ever-popular subject of “alien probes” comes up in the “Alien Abductions” episode, P&T produce a probe of their own and invite an alleged abductee to inspect it. Of course, the probe turns out to be a set of silver anal beads. Yes, it’s juvenile and stupid, but so is the idea of alien probes.

Spray-painted anal beads aside, the first season of Bullshit! owes a lot to past performers-turned-debunkers like Harry Houdini and James Randi. In that tradition, the show is basically populist skepticism, rational thinking for the masses. Penn is seen talking to a prop Houdini headstone in the opening seconds of the first episode (“Harry, can you believe it? The same bullshit you so thoroughly debunked almost a century ago is continuing, and even enjoying a resurgence,”) and Randi himself appears in a few early installments. His prickly takedown of a Nostradamus scholar at the 11:05 mark of the “End Of The World” episode perfectly illustrates the fertile field of past skepticism from which Bullshit! sprang.

Bullshit!’s snarky tone (not to mention Penn’s constant voiceover potshots) certainly disqualifies it as serious journalism in the 60 Minutes tradition. It’s at its best, however, when it simply lets people stand in front of the camera, open their mouths, and make fools of themselves. If the first season seems like shooting fish in a barrel, it’s only because the targets are so ripe and their takedowns so deserving. Check out Penn’s speech at around the 6:35 mark in the clip below, where he talks about the memory of his deceased parents, and why something as seemingly benign as a psychic pretending to communicate with a dead loved one is deeply harmful to all involved. It may be a bit heavy-handed, but it gets at the heart of Bullshit!’s best episodes, and sheds some light on the simple, quiet strain of humanism that runs though all of Penn and Teller’s best work.

Next steps: Though long out of print, Penn and Teller’s early forays into the world of literature are worth seeking out. 1989’s Cruel Tricks For Dear Friends, 1992’s How To Play With Your Food, and 1997’s How To Play In Traffic are first and foremost books of tricks, pranks, and scams—Food originally came bundled with phony fortune cookie fortunes and fake warning stickers like “May Contain Ground Glass”—but they’re also filled with thoughtful essays, wickedly clever short stories, and behind-the-scenes looks at some of P&T’s early TV appearances. Even more brilliant is the fact that the books are elaborate cons themselves. Thumb throughCruel Tricks back-to-front and you’ll see normal pages; thumb through it the opposite way and you’ll see nothing but tiny, hard-to-read red type. Even the front cover of Food is a gag, showing the incorrect setup for a stunt involving playing cards and eggs, just to mess with bookstore window shoppers.

1989’s Penn & Teller Get Killed, meanwhile, represented the duo’s lone foray into feature film. Despite having Bonnie And Clyde director Arthur Penn at the helm, it failed to set the world on fire. It has since gained a sizable cult following, however, mostly due to its ramshackle structure and occasionally brilliant set pieces. (Penn getting kicked out of Trump Casino for throwing quarters at Teller is a bizarre highlight.) It also contains a brilliant final sequence that does for Robin Gibb-sung Bee Gees songs what Saturday Night Fever did for Barry Gib-sung Bee Gees songs.

Strip away the books, the movies, and the bullshit, and Penn and Teller remain old school showmen at heart. As such, their live show in Las Vegas should absolutely not be missed. A canny combination of illusion, comedy, music, theater, and spectacle, the show is part magic act and part elaborate con game. Teller’s deceptively simple, strangely moving “Shadows” routine is worth the price of admission alone.

Where not to start: As Bullshit! lumbered into its later seasons (it was eventually canceled in 2010), it became apparent that there were only so many episodes P&T could devote to phony psychics and alternative medicine. Instead, the duo increasingly focused on subjects that betrayed their already outspoken libertarian political views. Well-deserved takedowns of aliens and creationism gave way to mean-spirited and puzzling attacks on environmentalism, reparations, college, and handicapped parking. A Wal-Mart popping up on every other corner of America was a good thing, and all that secondhand cigarette smoke wasn’t really that bad for you. (The secondhand smoke episode is the low point of season one.) At best, these episodes come off as contrarian and troll-like; at worst, they’re just plain wrong. A proposed final episode of the show exposing the bullshit of Bullshit! itself never materialized, though that’s probably for the best. Better to focus on the duo’s mostly silent, subversive triumphs than their loud, outspoken missteps.