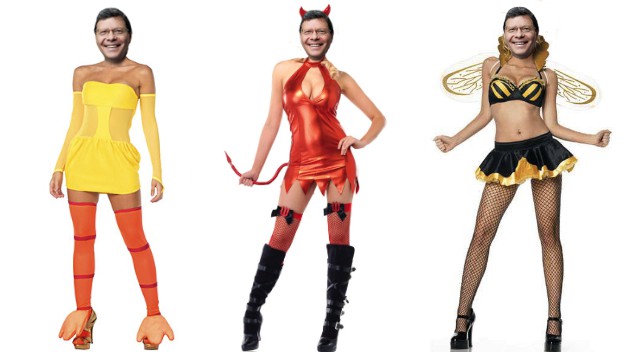 A recent Journal Sentinel story broke the news that—brace yourselves, folks—adults enjoy dressing up for Halloween. But what if you’re an adult who wants to dress up for Halloween and score some sweet Milwaukee-love points at the same time? That’s where we come in. Sure, you could dress up as Milverine (no shirt), Front Row Amy (tight shirt), or that hot dog guy on the corner of Wisconsin and Water (jorts), but those costumes are played out. Our costume ideas fall on the more cheap and conceptual end of the Halloween dress-up spectrum, because there’s nothing more satisfying than slapping something together at the last minute, and nothing more fun than spending the entire night explaining what you’re supposed to be.

Sexy Charlie Sykes
If a local right-wing-radio shit-stirrer says something asinine to his loyal listenership of cave-dwelling Morlocks, does he really make a sound? More importantly, if you dress up as a sexy version of said local right-wing-radio shit-stirrer for Halloween, are you guaranteed to make everyone you come in contact with barf? Find out by slipping on a short skirt, some fishnets, a pair of wire-rimmed glasses, a suspicious hairpiece, and a smug grin. (Bonus points for carrying remainders of Sykes’ “you might be a redneck”-esque book, A Nation Of Moochers.) Sykes and his ilk are big believers in sexual abstinence, so it’s only appropriate that the sight of a Sexy Charlie Sykes—hell, even the sight of the words “Sexy Charlie Sykes”—will guarantee absolutely no one gets laid this Halloween.

Looking east down Wisconsin Avenue
This costume requires two people to pull off, but the extra effort will go a long way in delighting and/or infuriating your fellow Milwaukeeans. The first person dresses up as the lovely Milwaukee Art Museum brise soleil (just wear all white and slowly flap your arms), while the second person dresses up in all orange and stands in front of the first person all night long. Viola, the constantly obstructed view will be just like looking east down Wisconsin Avenue! Yes, the person dressed as the bright orange sunburst thing will have to constantly endure know-it-alls insisting on calling it by its actual name, “The Calling.” And yes, the person dressed as the Art Museum wings will have to endure an entirely different group of know-it-alls reminding him or her that Santiago Calatrava had the bright orange sunburst thing in mind while designing the brise soleil. But such is the price for a conceptually brilliant Halloween costume that will continue to inspire countless click-friendly “What’s Milwaukee’s biggest eyesore?” blogs for years to come.

“Milwaukee Home” zombie
Nothing shows off and/or exploits your Milwaukee pride quite like a $25 T-shirt, especially one that features the word “Milwaukee” followed by another, seemingly random word. Yes, the inexplicably popular “Milwaukee Home” T-shirts are a big hit with today’s upwardly mobile young Milwaukeeans, proving once again that people will buy anything as long as the idea of “community” is tenuously attached to it. For this costume, simply buy a cheap zombie makeup kit from your community CVS, steal a “Milwaukee Home” shirt from your community laundromat, tear it to shreds, and hit the town. For extra verisimilitude, fiddle with your smartphone all night long (young professionals don’t have time to silence their phones!), yammer on and on about the streetcar project, and only hang out on Water Street.

The Shops Of Grand Avenue
The beleaguered Grand Avenue Mall has been a Milwaukee punching bag—and a source for easy web traffic—for almost as long as it was a functioning, relevant mall. Recent moves to attract non-profit creative groups to the mall’s many vacant spaces produced mixed results, and with a low-rent program designed to attract those groups all but eliminated, Milwaukee can once again enjoy a largely underutilized, tomb-like structure free of any major retailer. (Other than Boston Store, T.J. Maxx, and Rocky Rococo, of course.) For this costume, simply attach dozens of small, empty cardboard boxes to your body and reminisce about the days when The Gap, Old Navy, Suncoast Video, and a Hooters were accessible to visiting suburbanites and bus-riding city-dwellers alike.

The “Fresh Coast”
Depending on the day of the week and which well-heeled civic group has the ear of Mayor Tom Barrett, Milwaukee is either an “art city,” an “innovation city,” or a “water city.” One thing is for certain, though: it’s no longer a “Rust Belt” city, because the past is bad and the future is innovative and full of vibrant young professional place-makers or something. This easy costume idea includes two nods to Barrett’s recent campaign to re-brand Milwaukee as the “Fresh Coast”: a rusty belt with a big red “X” through it (Rust Belt bad!), and plenty of bottled water (something to do with water good!). The only downside, of course, is that no one will know what you’re supposed to be, because no one outside of city hall has ever referred to Milwaukee as the “Fresh Coast.”

Sexy Downtown Milwaukee
Back in July, Downtown Milwaukee hit upon a brilliant new ad campaign: Toss a bunch of generically sexy shots of downtown nightlife into a video, give it an embarrassingly “hip” name (“Cya Downtown”), and use Peaches’ “Downtown” on the soundtrack. Of course, Peaches’ “Downtown” has little to do with catching a show at the Pabst (sample lyric: “’Cause I wanna take you downtown / Show you my thing / Show you my thing,”) and a whole lot to do with sex. And what better time to celebrate downtown’s apparent fuckability than Halloween? Simply don your favorite Milwaukee-themed T-shirt, slip on your favorite skirt or pair of pants, cut a hole in the crotch, and you’re set. “Cya” on Craigslist’s “Missed Connections” the next morning!