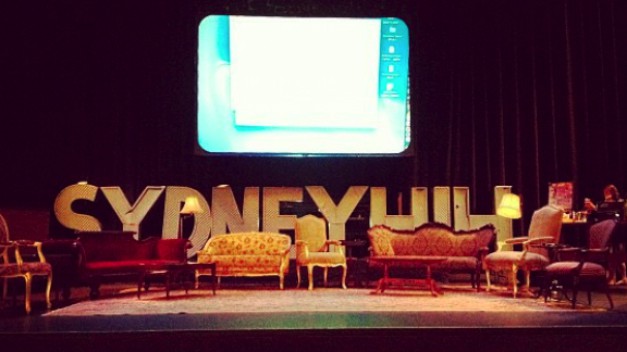 Back in January, the Pabst Theater and Historic Milwaukee hosted “Remarkable Milwaukee,” a roundtable-style chat between 14 local movers-and-shakers. Without checking my recap of the event, I’d be hard-pressed to tell you what was discussed. I know that historian John Gurda was one of the moderators, and that former Milwaukee mayor John Norquist made a joke about biking across the Hoan Bridge. Other than that, the night is a blur of heated chitchat and spontaneous applause any time someone stuck it to the suburbs or suggested tearing down the Grand Avenue Mall. But maybe specifics aren’t the point: The evening served as an effective pep rally for the city of Milwaukee, and brought more than a dozen civic-minded folks of all ages together under one roof. On Monday night, another group of passionate Milwaukeeans took to the Pabst stage for the second installment in the series, “Envisioning The Seen.” And, once again, I’d be hard-pressed to tell you what the hell it was all about.

If the night was unfocused and frequently frustrating, it wasn’t for a lack of compelling, diverse guests. Moderated by FOX6’s Ted Perry and Urban Milwaukee’s Bruce Murphy, “Envisioning The Seen” included folks like Lincoln Fowler (founder of Alterra Coffee Roasters), Young Kim (Executive Director of Fondy’s Food Mart), and Laura Bray (Executive Director of Menomonee Valley Partners). Similar to January’s event, the panel could be roughly divided into three groups:

“Development” was the overriding theme of the night, and it sparked brief discussions of everything from public transportation to the fate of the Sidney Hih building. (The specter of Sidney Hih hung heavy on the night’s proceedings, with the building’s iconic letters—gifted to the old-school punks of ART Milwaukee—looming behind the panel.) Other topics like minority hiring, the never-ending Park East development, and public schools were also broached. It was all interesting stuff, but too often members of the panel would simply call out popular pet causes in hopes of scoring some cheap applause: “Downtown streetcar! Woo!” “More bike lanes! Yeah!”

The most interesting discussion of the night ended up being Milwaukee’s oft-cited inferiority complex—or, as Fowler described it, the city’s “dangerous amount of humility.” The issue seemed to split along age lines: Kim claimed Milwaukee was “good at being modest,” and that its history of “steady, incremental progress” was akin to “hitting singles and doubles.” Guests like 88Nine’s Tarik Moody and NEWaukee’s Ian Abston, on the other hand, felt more cheerleading and positive self-promotion were needed. (Moody: “If we’re not going to do it, who will?”) But beyond tweeting nice things about the city, the younger members of the panel couldn’t point to many concrete ways aspiring entrepreneurs could assert themselves, and frequently complained about their lack of access to capital.

Strangely, the one young-ish person on stage with the most real-life success under his belt didn’t utter a single word. Mike Brenner acted as on-stage bartender, serving up concoctions from his in-the-works Brenner Brewing Company. That project is being funded entirely by a Kickstarter campaign, and it recently wrapped with more than $25,000 in pledges. If anything, Brenner’s project is the ultimate “young Milwaukee” success story—it even involves the Internet!—and the perfect summation of events like “Envisioning The Seen.” Beyond the chatter and the well-meaning boosterism, the message is simple: Want to change Milwaukee? Shut up and get to it.