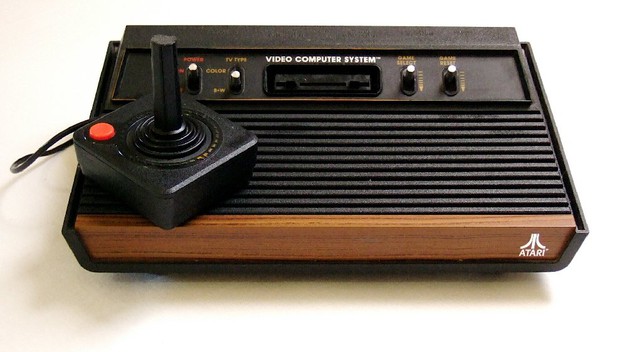 For the millions of now-functioning adults that grew up with video game controllers glued to their hands, the annual Midwest Gaming Classic is a can’t-miss event. The convention features boatloads of old- and new-school console and arcade games, free-to-play pinball machines, and events ranging from kid-friendly demonstrations to Mountain Dew-infused Halo: Reach tournaments. The Classic celebrates its 10th Anniversary this year, and will be held March 26 and 27 at the Sheraton Milwaukee Brookfield Hotel (375 S. Moorland Rd.)

Atari 2600 (1977-84)
Dan: My dad bought an Atari 2600 because of Space Invaders, but I benefited from it. I actually really got into it around the same time the NES came out, but my parents told me they wouldn’t buy me one because I had an NES, and it was the “same thing.” Of course, it wasn’t, but scouring rummage sales for games I didn’t own was a lot of fun, and I did enjoy (and still do enjoy) playing a simple but yet difficult game to chase a high score, and the 2600 had a ton of those.

Matt: I remember getting an Atari 2600 for Christmas, and then, three days later, a bunch of games for my birthday. I was in heaven. Yeah, the Pac-Man port was unbelievably shitty, and Combat was more notable for its endless variations (tanks; tanks with obstacles; invisible tanks with obstacles) than any sort of fun. But games like Seaquest, River Raid, and Adventure were awesome. My favorite 2600 game, however, would go on to become the unofficial Worst Game Ever Made: E.T. It was so bad that Atari ended up dumping thousands of E.T. carts in an Alamogordo, New Mexico landfill. As fate would have it, my future wife grew up in Alamogordo. Clearly, our union was the result of some spooky, sub-8-bit cosmic shit.

Teenage Mutant Ninja Turtles (arcade game) (1989)
Dan: I remember going to the arcade and being absolutely amazed by everything about this game. From the graphics and the story to the fact that it wasn’t just about the high score, it opened up my world to a whole different type of game I had never even realized existed. It doesn’t look that amazing now, but back then it was mind blowing. And, thanks to my grandpa, I actually beat it in the arcade, something I can’t say I did with too many other (or any?) arcade games.

Matt: The first TMNT game for the NES was a pretty drab, impossible slog (could anyone make it past that underwater bomb stage?), so it was nice to occasionally stop by the arcade and play a fun Turtles game. Every crummy family campground my parents dragged me to during the ’90s seemed to have this game—I have fond memories of playing it while still wet from the campground’s over-chlorinated pool, dropping in quarter after slimy quarter. Sadly, I didn’t have a kindly grandparent to help me beat it, but mashing buttons while wearing wet swim trunks was strangely satisfying.

Jurassic Park (pinball) (1993)
Dan: I vividly remember being dragged to Summerfest by my parents one summer. The only thing I liked doing was hanging out and watching people play games in the big arcade tents. I convinced my parents to let me hang out in the arcade tent while they watched some act perform, and I was drawn to the Jurassic Park pinball machine because I loved Jurassic Park. I had always thought pinball was just luck and would avoid it on the rare days I got quarters to play (unless I was with my grandfather), but on that day, I saw someone play for about 45 minutes, all on the same game. Watching that game literally changed my arcade habits, and I searched out and played Jurassic Park pinball every chance I got, as well as any other pinball machine I found.

Matt: For me, pinball is a lot like the music of Frank Zappa: I’m glad it exists, but I just don’t get it. I will agree that Jurassic Park (the movie) kicks all kinds of ass. I remember spending the summer of 1993 obsessing over the movie, and wondering if I would ever score a hot paleobotany grad student that looked like Laura Dern.

Atari Jaguar (1993-96)
Dan: This isn’t a system that a lot of people remember, and if they do, it generally isn’t fondly. I remember it well thanks to it being the first console I purchased myself (on clearance!) and being the first console that I started collecting for. The Midwest Gaming Classic actually exists because of it—the first show was a celebration of the Atari Jaguar console, and it was so much fun that we built a show around it!

Matt: Who knew such a cool event was inspired by such a lousy system? (I kid, I kid.) The Jaguar came out during an awkward time for the video game industry, when the “bits” mattered more than the gameplay. (The Jag claimed an astounding 64 bits, a claim that was more or less bullshit.) I remember conning my friends into renting the system and a couple of games from the local Piggly Wiggly. After playing 10 minutes of a generic fighting game (Fight For Life?), we turned the thing off and cursed its very name. The fact that the Jaguar had a controller the size of a small child didn’t help, either.

Sega Dreamcast (1998-2001)
Dan: To me, the Dreamcast is the last true arcade-lovers console. It had tons of great arcade titles (Crazy Taxi, Soul Calibur, Marvel Vs. Capcom, Gauntlet Legends, Hydro Thunder, Mars Matrix) that gave me the chance to chase high scores like I did on the Atari 2600. It also had a bunch of off-the-wall titles like Seaman, Space Channel 5, and Jet Grind Radio that really made it unique. While I like the next-gen consoles and own them, there’s just an “it” factor that the Dreamcast had for me that I enjoy to this day.

Matt: Ah, now we’re talking. The Dreamcast is one of my favorite classic consoles, and one of the best video game systems, period. All the games you mentioned are great, but let’s not forget about some terrific RPGs: Grandia 2, Phantasy Star Online, Shenmue. You’re right about the “it” factor; there’s something undeniably unique and special about this system. Even though it had a criminally short lifespan, and was eventually crushed by the vastly inferior PS2 (I’ll never forgive you, Sony), the Dreamcast is always hooked up in my house—right next to my Atari, my NES, my Genesis, my Super Nintendo, and my TurboGrafx16. Life’s just too short for next-gen systems.