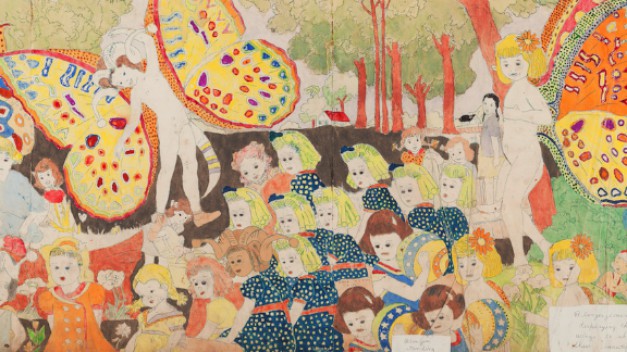 The Milwaukee Art Museum’s newest exhibit, Accidental Genius: Art From The Anthony Petullo Collection, poses an interesting question: What’s in a name? More specifically, what can be done when names and labels like “outsider art” become passé, reductive, or even offensive? The title of the exhibition hedges its bets and settles for an “accidental” label. It’s as good a descriptor as any: How else to describe accomplished art from untrained artists, and unforced beauty from the most unlikely of places?

Accidental Genius represents a gift of more than 300 individual pieces to the art museum from Milwaukee businessman and entrepreneur Anthony Petullo. Curated by Margaret Andera and whittled down to a slightly more manageable size, the thoroughly fascinating exhibit includes works from the likes of Rosemarie Koczy, a survivor of two German concentration camps, and Henry Darger, a reclusive Chicago janitor who secretly created one of the longest works of fiction in the English language. (Many will be familiar with Darger from the excellent 2004 documentary In The Realms Of The Unreal.) Far from academic curiosities, the work on display in Accidental Genius is a celebration of raw, unafraid, and oftentimes unnerving artistic expression.

Reading up on the artists’ various backstories enriches many of their pieces (Bill Traylor, for instance, was born into slavery on an Alabama cotton plantation), but the vast majority of the works are attention grabbers in their own right. Alfred Wallis’ cardboard paintings of ships and landscapes are stunning in their simplicity, while Josef Karl Rädler’s double-sided watercolors are incredibly accomplished. Still, knowing that Petullo was one of the early champions of an like artist Albert Louden—and that the still-active Louden stores his paintings of rounded, Weeble-like figures in a garden shed—adds some welcome color to the more idiosyncratic pieces.

The exhibit is cleverly organized into a series of themes. The tight, precise lines of Scottie Wilson—a Scottish artist whose work was collected by Picasso—exemplify incredible draftsmanship, and call to mind the obsessive lines of R. Crumb (and, to a much greater extent, Crumb’s late brother Charles). Works from Madge Gill—a London nurse who claimed a spirit named Myrninerest was her muse—are equally detailed, but also feature recurring characters, which is another theme of the show. Many great artists are self-taught, but what separates the exhibit’s “accidental” artists are their fully formed and purposeful styles straight out of the gate. It’s impossible to imagine James Lloyd’s “Among The Grasses (Susanna York)”—one of the show’s many highlights—springing from a conventional art school education. 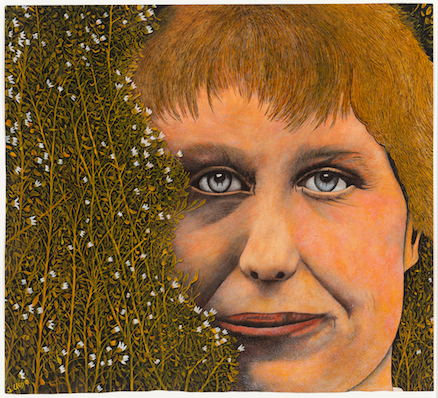 The exhibit’s biggest draw, however, is a piece from Darger. Double-sided and suspended from the ceiling, the mammoth mural is presented like a holy relic. Both sides feature Darger’s familiar collage technique and depict a fantastical scene from the artist’s staggering 15,000-page saga of the cherub-like Vivian Girls. Darger’s skewed vision is on full display here, with Vivian Girl-word balloons—containing lines like “Two carloads of dynamite? Where did you say?”—giving a tantalizing taste of his impenetrable tale. Discovering Darger’s work from a documentary is fascinating; seeing it up close is an otherworldly experience. 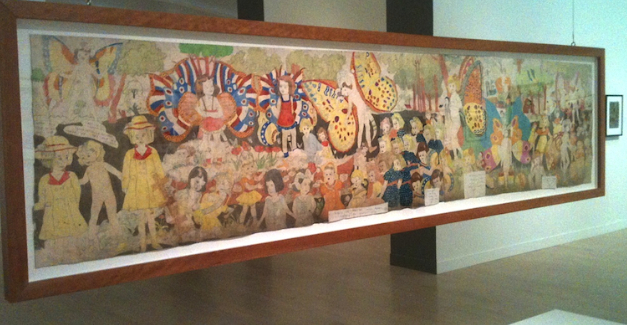 But what about that label? Music has long grappled with the problem of outsider artists, a category that includes everyone from The Shaggs to Daniel Johnston. In those cases, much has been made of the intent of both the artist and the listener: Is the artist being sincere? Is he or she really an “outsider”? Is the listener truly enjoying the music, or simply chuckling behind a shield of cool and condescension? It’s clear from Accidental Genius that the artists on display are indeed the real deal, and that both Petullo and Andera have nothing but the highest respect for them.

That respect comes from more than just artistic appreciation. Petullo grew up in Chicago, and at one point lived less than three blocks from Henry Darger. If anything, Accidental Genius is a stark and fascinating reminder that the sublime can be found anywhere: cluttered attics, garden sheds, or just around the corner.