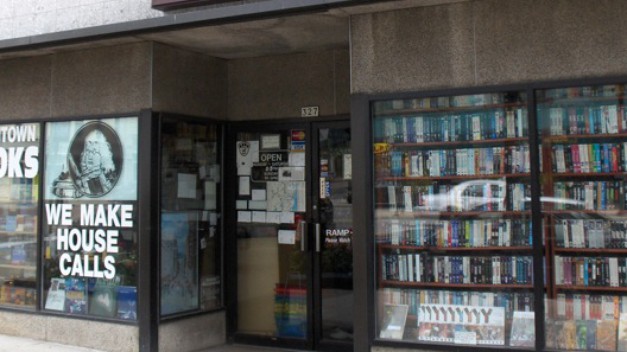 In a city that boasts a world-class art museum and a state-of-the-art, domed stadium that purports to house a Major League Baseball team, Downtown Books can easily get lost in the shuffle of Milwaukee’s “must-visit” destinations. It’s a shame, really, since the legendary used bookstore is one of downtown’s most unusual draws. Featuring nearly three stories of books, magazines, and free-roaming cats, the oft-overlooked gem is both a valuable resource and something of a daunting labyrinth—dozens of closet-sized rooms, dead ends, and roped-off areas all but guarantee a full afternoon of browsing for adventurous shoppers. With a mere $20.95 in our pockets, The A.V. Club explored some of Downtown Books’ darker corners, and unearthed treasures great, small, and faintly ridiculous. 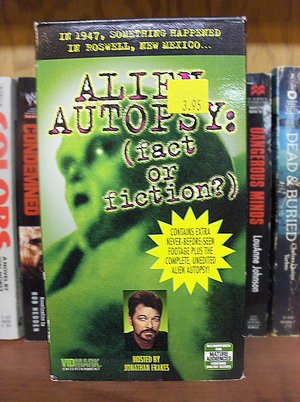 Alien Autopsy: Fact or Fiction ($3.95)
Like any good used bookstore, Downtown Books stocks plenty of old VHS tapes to satisfy the outdated technology buff in everyone. The front half of the first floor is dominated by towering shelves of neatly arranged videos, ensuring you’ll have no trouble locating a double VHS set ofTitanic, or a much-needed copy of Kickboxer 3: The Art Of War. Dig a little deeper and you might stumble upon something like Alien Autopsy: Fact Or Fiction. Originally broadcast on Fox in 1995, Alien Autopsy features alleged footage of surgeons slicing and dicing a poorly constructed rubber dummy—er, alien—recovered from the 1947 Roswell weather balloon hoax—um, UFO crash. Slumming Hollywood special-effects wizards like the late Stan Winston breathlessly remark on how difficult the film would be to fake, though any viewer with a rudimentary knowledge of film, surgery, or common sense can easily see the whole thing is complete and utter horseshit. The hour-long program is hosted by the impeccably bearded Jonathan Frakes, no doubt an expert on extraterrestrial life because, you know, the dude was on Star Trek.

Algebra Unplugged ($5.95)
Beyond casual reading, Downtown Books offers a fair amount of used textbooks and academic aids for students operating on borderline-poverty budgets. Published in 1996, Algebra Unplugged aims squarely at the era’s jaded, flannel-clad, algebra-adverse youth by invoking the then-hot MTV Unplugged series. Along with plenty of in-your-face, nondescript graffiti, the cover offers a tantalizing look at the Bel Biv DeVoe/Ani DiFranco collaboration that so many Gen-Xers once pined for. Flipping through the book’s 258 pages, however, reveals nothing but dry-as-dirt algebra, and almost no instances of plugging, unplugging, or Nirvana covering the Meat Puppets.

Shooter’s Bible ($7.15)
Lest anyone think Downtown Books caters only to socially awkward, book readin’ dweebs, the store features plenty of material aimed at grizzled sportsmen and gun nuts alike. Take the 1979 edition of the Shooter’s Bible: In lieu of the collected works of Anton Chekhov, the imposing tome contains nothing but page after page of technical specs for Remington bolt-action rifles, .22 automatic Luger pistols, and the occasional compound bow. “The Animal Art of George LaVanish” adds a bit of taxidermy-flavored fun to the Bible, while a lengthy, barely readable essay asks the eternal question, “Bullet vs. Broadhead: Which is more efficient?”

Jeffrey Dean Hartel, 90’s Romance ($.95)
Along with an ample collection of used CDs located behind the front counter, Downtown Books features plenty of shadowy back rooms overflowing with old LPs, 45s, and yellowing sheet music. Dusty cases of cassette tapes also abound, where copies of the beloved Paula Abdul/MC Skat Kat cassingle “Opposites Attract” sit side by side with lesser-known efforts, like Jeffrey Dean Hartel’s tantalizingly titled 90’s Romance. Not much is known of the mustachioed, Gallagher-like Hartel, though song titles like “Melvin’s First Love,” “Surely Shirley,” and, um, “Ice Cream And Carriage Rides” certainly betray a strong grasp of romance in the grunge era. 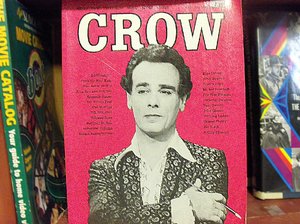 Crow magazine ($2.95)
One of the many pleasures of exploring Downtown Books is digging through the boxes of old magazines scattered throughout the store. Mixed in among them is Crow, a long-lost LGBT film and music zine. The July ’88 issue features the dandified visage of Blue Velvet’s Dean Stockwell on its cover, while the inside pages are dedicated to profiles of gay icons like Ed Wood, Jr., Bette Davis, and Pee-wee Herman. A piece on Stanley Kubrick’s Full Metal Jacket entitled “The Common Decency For A Reacharound” is included, as is an essay-length discussion of the latent homosexuality found in the 1987 Kirk Cameron/Dudley Moore vehicle Like Father Like Son. Sadly, scholarly writings on Cameron’s recent fascination with the “atheist’s nightmare”—a.k.a. the banana—would have to wait for nearly two decades.