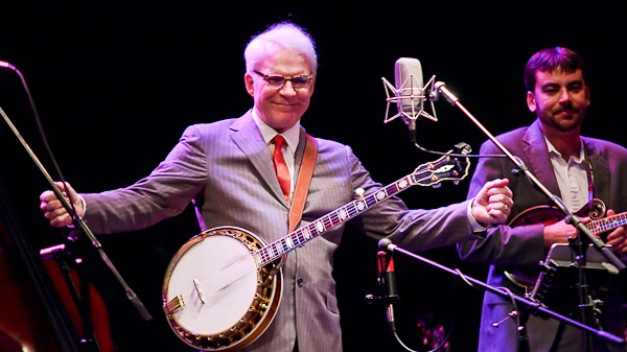 In the 1998 documentary, Wild Man Blues, legendary film director and hands-on stepfather Woody Allen is shown on tour with his New Orleans Jazz Band, sullenly playing his clarinet and trying his best to blend in. Like other musical groups saddled with a big star—think Jared Leto in 30 Seconds To Mars, or (gulp) Keanu Reeves in Dogstar—Allen makes the disingenuous, highly annoying assumption that audiences aren’t there for him, but are rather shelling out good money for a chance to see an unknown jazz band. Luckily for last night’s capacity crowd at the Pabst Theater, Steve Martin held no such illusions. Taking the stage to an instant standing ovation, Martin quickly put to rest any fears that the evening would be comedy-free. “I’ve always dreamed of playing bluegrass in the Pabst Theater,” Martin quipped. “Tonight, I feel I’m one step closer.”

While there was plenty of funny to be found in Martin’s 100-minute performance—an early reveal that his set list was jotted down on an iPad got a big laugh—the night was obviously a showcase for the comedian’s newest incarnation: Steve Martin, award-winning songwriter and banjo virtuoso. (Not that the banjo is new to the former Three Amigos co-star—the instrument has figured prominently in his career since his earliest stand-up days.) Accompanied by a bluegrass quartet from North Carolina, the terrific Steep Canyon Rangers, Martin spent the bulk of the evening performing original material, most of it culled from his 2009 Grammy Award-winning album, The Crow: New Songs For The Five String Banjo. Noting that he had won a Grammy 31 years earlier for his comedy album, Let’s Get Small, Martin beamed, “I’d say I’m on a roll.”

In prior interviews, Martin has compared the dislike of banjo music to similar aversions to jazz. Unlike jazz, however, the comedian’s bluegrass compositions were all readily accessible. “More Bad Weather On The Way” and the raucous “Saga Of The Old West” nicely gave each member of the band a moment to shine, while “Hide Behind A Rock” and “Words Unspoken” proved that even banjo music could be pleasantly soothing. Other songs towed the line between comedy and straight-up bluegrass: “Jubilation Day” put a hilarious spin on the standard break-up song, while “The Atheist Song” and the kid-friendly “Late For School” served as showcases for both Martin’s 5-string prowess and his knack for clever, off-kilter lyrics. Clearly a virtuoso, Martin never seemed to be pickin’ and grinnin’ for pickin’ and grinnin’s sake, nor did his playing ever come across as show-offy.

Aside from the exemplary music, there was plenty of shtick to go around. From absurdist non-sequiturs to constantly browbeating his band (“What do YOU guys write your set list on?”), Martin’s distinctive sense of haughty humor was in full effect. His ruminations on his failed protest song, “Let’s Keep The Minimum Wage Right Where She Is,” left the Lipitor-addled crowd in stitches, while an offhand comment on how the band’s upright bass doubled as a refrigerator paid off nearly a half-hour later when Martin casually procured a bottle of beer from the back of it. “I like to write songs about my personal experiences,” he claimed mid-set, before announcing the title of his next number: “I Think My Masseuse Is Too Chatty.” Ever the consummate pro, Martin even wrapped things up with his signature tune, “King Tut,” putting a fine point on a night that both surprised and delivered exactly what the audience had come to see: Steve Martin, comedian.