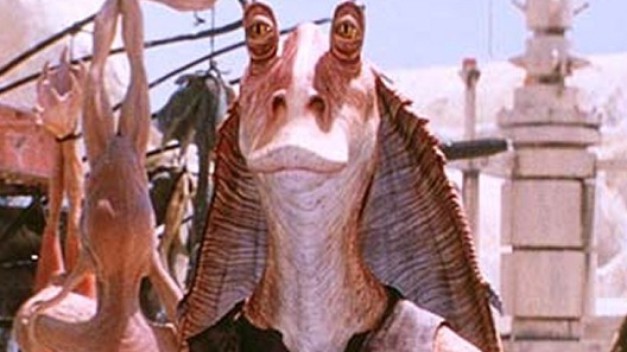 In 1999, Star Wars Episode I: The Phantom Menace was released amid an unprecedented amount of media hype and fanboy expectation. Nearly 20 years had passed since the last Star Wars film, and hopes were high—some would say impossibly so—for the next installment in George Lucas’ game-changing space opera. Needless to say, the film fell spectacularly short. With its bewildering plot, stiff acting, and the presence of the instantly loathed Jar Jar Binks, Episode I left many Star Wars fans cold.

Ten years later, the film hardly seemed worth revisiting. But in late 2009, a 7-part, 70-minute YouTube video created by Red Letter Media—a.k.a. Milwaukee’s Mike Stoklasa—hilariously dissected the film in excruciating detail. The video was an instant hit, and by the time a 90-minute review of Episode II: Attack Of The Clones was released earlier this month, Stoklasa had become a bona fide Internet sensation. The A.V. Club recently chatted with the Milwaukee filmmaker to discuss his enormously popular videos, his thoughts on the “genius” of George Lucas, and why the only believable thing in Episode I is Jar Jar Binks.

The A.V. Club: Is Episode I really all that bad?

Mike Stoklasa: [Laughs] Yeah, it is. It’s bad in almost every way that a movie can be bad except for the sound and picture quality. It may seem strange to be discussing this movie after it’s been out so long and because Star Wars is totally irrelevant now, but I guess the 10-year mark is a good time to look back at a film and see how well it’s aged.

MS: I just think that the prequels will evaporate from history while the original films will remain relevant for a while to come. The new films failed to create any iconic, memorable imagery, and it’s all very forgettable.

AVC: Is Attack Of The Clones at least an improvement over The Phantom Menace?

MS: In a way, it’s worse. It lacked the basic structure that The Phantom Menace had, and we had to endure a forced and awkward romance. At least TPM felt more like a “real movie” because it was shot on actual film and had more real sets. Clones was the first feature shot digitally, and looks more fake-y in hindsight.

AVC: A lot of people attribute the failure of the prequels to Jar Jar Binks. Your videos seem to touch on some more fundamental problems.

MS: It’s hard for a lot of people to articulate why exactly they hated The Phantom Menace because it’s such a clusterfuck of a film, so they point to Jar Jar. In fact, you can make an argument that Jar Jar was the only thing you could understand clearly in the movie. He had some kind of motivation and a character arc. He was annoying, yes, but ironically, he was the most realistic and understandable thing in the film.

AVC: Can the blame be placed solely on George Lucas?

MS: I’m honestly not a “George Lucas ruined my childhood” person—I don’t care that much—but I consider myself a “George Lucas disappointed my adulthood” person. You see, I’m not convinced that George is this genius filmmaker that he’s always been portrayed as being. My impression of the man is this: I see him as a guy who had a neat idea to make a space adventure movie in the spirit of the old Flash Gordon serials. Modernize it a little, make it share a lot of visual elements with World War II, add some mythological elements to it and call it Star Wars. Then get a whole bunch of other people to make it work somehow. Then take all the credit for it. Then use your influence as an “idea man” to produce such hits as Howard The Duck, The Young Indiana Jones Chronicles, and Radioland Murders.

AVC: It seems that having complete control can sometimes be detrimental. Do you foresee that becoming a problem for you and your videos? Cut off from reality and surrounded by “yes men”?

MS: [Laughs] No, no. I think it’s okay for someone to have more control on a project. I think it was Francis Ford Coppola that said a film director is the last dictator-like position you can have in the world. I just don’t think that George Lucas knows what he’s doing. I think the original Star Warsmovies were so successful because he didn’t have control over them. And yet you have other filmmakers who have complete control, and their films turn out great. I think Lucas is a unique case where he works best when other people take his ideas and work with them. But when he writes and directs it’s disastrous.

AVC: Part One of your Attack Of The Clones review was briefly removed due to a copyright claim. Was there ever any fear that George Lucas was going to sue you?

AVC: Other than copyright scares, have you been enjoying your Internet fame?

MS: [Laughs] I’ve been enjoying all the perks of being Internet famous for making a rant about Star Wars that no one will remember in three months. Things like V.I.P access to all the hottest nightclubs, the private jets, women, drugs. It’s truly amazing how many people want to know the guy that made the 70-minute Phantom Menace review. Oh, wait, none of that’s true.

AVC: You call The Phantom Menace “the greatest example of cinematic blue balls in the history of motion pictures.” Will there ever be another film that lets so many people down?

MS: Yes, Ghostbusters 3. I haven’t even seen it and it’s already let me down. That and maybeGremlins 3. They’ve already managed to sort of fuck up the fourth Indiana Jones, so I’m not expecting much from those films. But as bad as a lot of the more recent sequels and re-boots have been, I doubt there will be anything as big as something like the “new Star Wars.”

AVC: Maybe it’s time to let some of these childhood films go?

MS: The argument that we’re just people who “can’t let go of their childhood” is just an insult to defend the massive failure of the newer films. By saying that movies become stale and irrelevant after their childhood audience has passed into adulthood—you wouldn’t have films like The Wizard Of Ozstill remaining popular after all these years. So I’m not a bitter, fat, nerd living in his parent’s basement. I’m just a guy who’s trying to explain in detail why the prequels are awful disasters. There’s a science to all this—sort of.