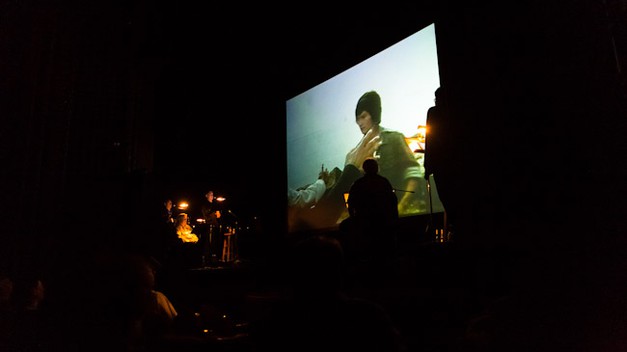 It’s impossible to review a live performance of Cinematic Titanic—the latest B-movie “riffing” venture from the creators of Mystery Science Theater 3000—without simply repeating a handful of the night’s many, many quips. So, without further ado:

[During a scene where two towheaded boys are attacked by snakes]
“We now return to the absolute final episode of The Suite Life Of Zack & Cody.”

[During a particularly stilted romantic scene set in the desert]
“What doesn’t happen in Vegas, stays in this movie!”

[During a scene set in a school hallway]
“All teachers, please forfeit your collective bargaining rights at the front office.”

It was whip-smart (and timely) cracks like these that won over a sold-out crowd on night two of Cinematic Titanic’s Friday/Saturday stint at the Pabst Theater. Like the throngs of now-middle-aged indoor kids that made up the bulk of the adoring audience, the former MST3K cast members had clearly grown up. Still, they were recognized and cheered for their roles on the more than 20-year-old show: Joel Hodgson, creator and original host; Trace Beaulieu, Dr. Clayton Forrester and the voice of Crow; Frank Conniff, TV’s Frank; Mary Jo Pehl, Pearl Forrester; and J. Elvis Weinstein, the voice of the original Tom Servo. (“The one you didn’t like as much!”)

Prior to the main event, each Titanic member took the stage separately for some pregame shtick. Conniff deadpanned his way through a stand-up routine; Beaulieu read a few selections from his book, Silly Rhymes For Belligerent Children; and Hodgson did a card trick. Weinstein stole the show with a terrific, unexpected performance of Elvis Costello’s “Watching The Detectives,” accompanied only by a bass guitar and an iPad organ app. Hodgson and Weinstein’s performance of theMST3K theme song was similarly winning.

Following a brief break, the entire Titanic crew returned to the stage and the members took their places on both sides of the screen. “Are you guys ready to see a really shitty movie?” asked Hodgson. He wasn’t kidding: The film in question was 1976’s Rattlers, a stunningly awful “nature-gets-pissed” flick that tells the timeless tale of a small desert town terrorized by rattle snakes. Indeed, the film was so ludicrous (stiff acting, limp pacing, baffling edits, a rushed romantic subplot), that at times the jokes seemed superfluous.

The riffs came fast and furious regardless, and referenced everything from Chuck E. Cheese, Brett Favre, and the formerly trapped Chilean miners, to Paul Harvey, David Carradine, and camel toes. All five Titanic members got off plenty of terrific scripted jabs, though Conniff and Pehl seemed to score some of the bigger laughs—the latter finding plenty of juicy material in the film’s rather tortured ideas of women’s lib. Never going for the easy jokes, the team proved its mettle as a group of true riff professionals.

The crowd, meanwhile, howled throughout the film’s seemingly interminable 82 minutes. The only exception was a group of four balding, perpetually scowling bozos who chanted “Go, Walker!” after the many cracks referencing the ongoing drama in Madison. (Hodgson, for the record, is a native Wisconsinite.) The rest of the Pabst crowd had them easily outnumbered, however.

Politics aside, the evening posed an interesting question: What is the state of smartass movie riffing in 2011? (Next Sunday, A.D., if you will.) Hodgson and company pioneered the art form with MST3K back in the late ‘80s, and DVD commentaries continued the trend into the 21st century. But in the current climate of streaming movies and bare-bones Redbox rentals, the era of chatty special features and running commentaries appears to be all but finished. (Sorry, RiffTrax.)

Like musicians, the players behind Cinematic Titanic seem to have struck upon the last—and perhaps most rewarding—way to make a buck off of their art: live performance. It’s an experience that can’t be streamed or downloaded; and, based on the evidence from Saturday night, it’s one that’s ridiculously fun. Note to the indoor kids: It’s time to put on a clean shirt, step outside, and take in a show.