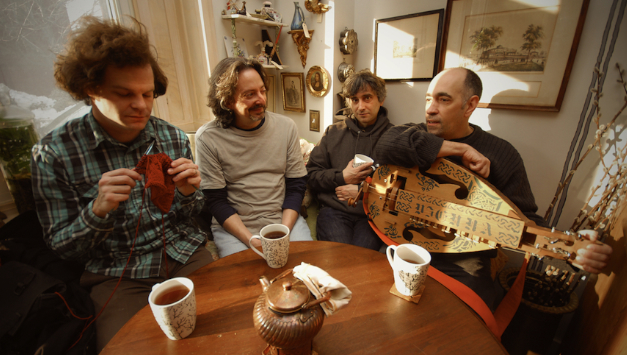 History hasn’t been kind to The Dead Milkmen. While fellow ’80s music geeks They Might Be Giants have been elevated to nerd-rock gods, the Philadelphia foursome responsible for “Bitchin’ Camaro” and “Punk Rock Girl” faded into obscurity and day jobs. Sixteen years after fizzing out with the justly forgotten Stoney’s Extra Stout (Pig), the Milkmen make good on their recent reunion gigs with the somewhat unexpected The King In Yellow, which the group released suddenly on its website this month. Lead singer Rodney Anonymous sounds his usual snotty self on opener “The King In Yellow/William Bloat,” a song that marries twisted storytelling and wistful, Soul Rotation-era instrumentation. Guitarist Joe Jack Talcum gets only a handful of songs to himself, but they’re all notable: “Hangman” recalls fan-favorite “Dean’s Dream,” while the otherwise clunky “Some Young Guy” is the only Milkmen song to address Talcum’s sexuality.

When the album isn’t gleefully taking the piss out of TV anchorwomen, Norah Jones, or fans of Wes Anderson, King is surprisingly grim, filled with murderous characters and dire prognostications. But for all the invective, few of the songs are memorable, and too many fall back on hopelessly lead-footed song structures. At their best, The Dead Milkmen took junior-high-level brattiness and combined it with genuine wit and songwriting chops. It’s nice to have the band back, though the songs seem to be missing this time.