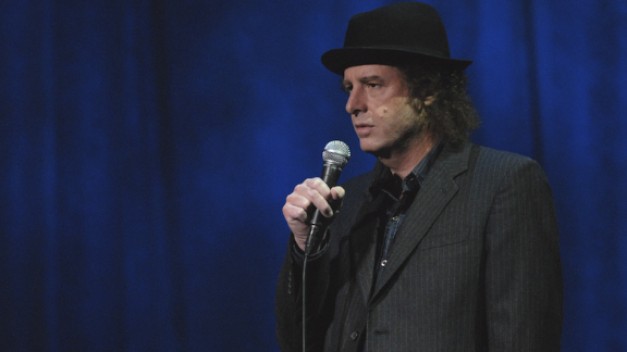 More than 30 years into a singular career, comedian Steven Wright needs little introduction. His pithy and surreal one-liners—all delivered in a half-awake monotone—serve as the perfect primer to the man and his sense of humor. “I like to skate on the other side of the ice,” may be funny, but “You never know what you have until it’s gone. I wanted to know what I had, so I got rid of everything,” is practically a snapshot of Wright’s psyche laid bare. Before his show at the Stoughton Opera House Oct. 7, The A.V. Club spoke to Wright about Twitter, Louis C.K., joking around with Craig Ferguson, and why the idea of taking his family to Six Flags is funny.

The A.V. Club: You started writing a short story on Twitter earlier this year, but you stopped sometime in May. What happened?

AVC: It seems that Twitter is custom-built for your type of jokes. Is there a reason you haven’t embraced it?

SW: I just feel these short things that I do … I connect them to being onstage. To me, they’re an alive thing. I say them, I hear the reaction. To have them out there, just written on there, that doesn’t interest me at all.

AVC: Is it a matter of giving something away for free?

SW: No, it’s not giving it away. I don’t know; there’s something about performing live that’s so much more interesting to me. So when I was going to write that story, two days before…I didn’t think that I didn’t want to do it, I didn’t even think what I just told you. I didn’t think, “I don’t want to put these little things on there.” I wasn’t even really thinking about it. So two days before I started doing it, I thought, “I know, I’ll write a story. Who cares? You can write anything.” I wrote a short story years ago that I had coincidentally re-read about five days before I did the Twitter thing. So the short story was in my head—not that story, but the idea that I had written a short story. So I thought, “I’ll see if I can write another one. I’ll write it on there.”

AVC: It’s funny, because by the very nature of Twitter, it’s hard to read. You almost have to read it backward.

SW: What do you mean?

AVC: The first entry is at the bottom of the page, and you have to read up to get to the newer entries.

AVC: George Carlin used to have trouble with jokes and essays floating around the Internet that were incorrectly attributed to him. Have you ever had that problem?

SW: Oh yeah, yeah. About eight years ago, if I put my name in there, the material that came up, I had written all of it. Four years after that, I put my name in, and I wrote about half or two-thirds of it. Now it’s just so mixed of what I wrote and what I didn’t write. I never really think about it, though, unless someone is asking me about it. It never enters my mind. But it’s disturbing—now you have me thinking about it—it’s disturbing because some of those jokes that I read, I wish I had written them. Some of them are really amazing. But a lot of them are horrible, and I’m embarrassed that if someone reads it, they don’t know which ones are which. And I think, “They think I wrote that?” It makes me cringe. It’s like the Wild West, the Internet. There are no rules. It’s like if someone broke into a Barnes & Noble store, and went over to an Oliver Twist book and ripped out Chapter Eight and put their own Chapter Eight in. So when you’re reading it, all of sudden he’s in Miami building boats. And someone’s reading it and thinking, “What the hell is he doing? How did he even get to Miami?”

AVC: Do you have any interest in clearing the air about jokes that aren’t yours? George Carlin used to have a disclaimer on his website that said unless a joke came from one of his albums, specials, or books, it wasn’t his.

SW: I’ve thought of that over the years, just printing out everything that’s my stuff. I thought of it, but I don’t really think about it that much. At first, I thought it was going to affect performing live. If they could just read all this stuff—when it was just my stuff—why go see me if they can just read it? But it had no effect.

AVC: What keeps you performing live after all these years? Is it a grind?

SW: It’s not a grind, because I do the amount I want to do. When I was doing it much more, I was still into it … and now I don’t do it so long that I’m like, “Geez, I can’t wait for this to be over.” But there’s something about being in front of a live audience that’s fun. It’s a really interesting, very electric, very alive, and intense experience, and you can’t get it anywhere else. And I’ve been doing it since I was 23, so it’s part of my being—it’s part of my fabric as a person. I perform live. I don’t enjoy staying in the Marriott, or feel like going to the airport, but that’s just part of it in order to get onto a stage.

AVC: What are doing during the down time?

SW: I write some stuff, I paint, I play the guitar, I follow baseball. I have a bike that I ride—I rode 14 miles today. I basically hang out.

AVC: You recently popped up on the season finale of Louie, goading Louis C.K. to hook up with a woman after his set. That seemed a little against type for you.

SW: I think that’s why he had me do it, because it wasn’t something I would normally do. I think that amused him. He even had me saying words that he thought I would never say. Like “getting some tail,” I think. [Laughs.] There was another word that was totally wrong—oh yeah: He had me taking my family to Six Flags. He just couldn’t imagine me saying that. These were the things that were amusing to him. That guy is a genius. He’s unbelievable. I can’t believe that he writes it, directs it, and edits it. And then I saw him do stand-up in June—he’s one of the funniest comedians I’ve ever seen in my life. I don’t understand a brain like his. Not only how is he that funny, but how can that volume of stuff be coming out of his head? I really admire him.

AVC: His show seems to blur the line between fiction and reality, and lift the veil somewhat on showbiz and the world of comedy.

SW: I’ve seen probably three or four episodes, so I never connected it to what you’re saying. I can’t really answer you from what I’ve seen, but I’ll believe you that he’s lifting the veil. And what do I think of that? Fine, whatever, there are no rules about anything. If that’s what he wants to do, and he thinks that’s interesting and funny and amusing, that’s fine.

AVC: Your last album, I Still Have A Pony, came out in 2007. Are there any plans for something new?

AVC: When do you know you have enough for an album? Is it just the sheer amount of time?

SW: The amount of time, and the quality and level of it. Just because you have enough time, it doesn’t mean that that’s it.

AVC: What kind of quality control do you have for your material? Does a joke have to pass a gauntlet of tests before you use it?

SW: A lab, I have a lab. With synthetic audiences. [Laughs.] No, it’s just trying it out in front of a live audience. I’ll either go into a small club and try things, or most of the time I’ll slide them into a whole show. And the audience has to laugh a certain amount. They have to laugh three times—in order to count on it, three different audiences have to laugh at it. The audience is deciding. They’re like the editors. They don’t know, but they’re deciding the whole thing.

AVC: You’ve also been popping up a lot lately on Craig Ferguson’s show. How important is the late-night talk show scene to comedians these days?

SW: There’s not one show now where everything could change for you. During my time, when you went on The Tonight Show … the whole thing changed for me overnight. There isn’t a show like that now. Comedians still want to get on these shows and do stand-up. That’s still there. I like to go on [with] Craig Ferguson because I think he’s hilarious, and I do improv with him. The whole segment is made up. I’ve never done that before. With other shows, I say what I had prepared, and maybe go off a little bit. But this is completely off, which is fascinating for me. It’s an interesting experience. And his mind, talk about a mind—like Louis C.K.—his mind is going 10,000 miles an hour. So if you say something that doesn’t go that well, he just follows it up. The whole thing comes off well because you’re contributing, and he’s contributing and helping the situation. That’s new. I’ve never done that, even live onstage in front of 30 people, so to be doing it on television with him is fun.