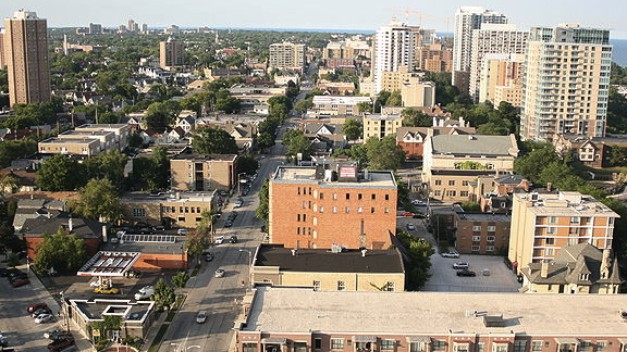 I moved to Milwaukee in the fall of 1996, and immediately set up shop on the fashionable and oft-maligned East Side. Back in those pre-millennial days, many of my close friends lived alongside me, and we all led magical, adventure-filled East Side lives. (Full disclosure: We spent most of our nights at the Landmark.) Then, slowly, things began to change. My more bohemian-minded pals started relocating to Riverwest, and a handful of others began settling down in Bay View. But even as these restless friends abandoned the neighborhood, I stuck to my guns, moving from one East Side apartment to another. In all the years I’ve lived in Milwaukee, I’ve never lived further west than Cramer Avenue, and never further south than Bradford Avenue.

And why not? I’m comfortable on the East Side, and Milwaukee’s size is manageable enough that even my most distant friends are only a 20-minute bike ride away. But a recent conversation with a friend about Bay View’s Gallery Night blowout—not to mention some drunken soul-searching during Riverwest’s Locust Street Fest—has left me struggling with a prickly question: Does the East Side still matter?

A lot of people would say “no.” It’s easy to see why: The neighborhood doesn’t have the scuzzy community vibe of Riverwest, the metropolitan allure of Downtown, or the aging cool-kid cache of Bay View. Ask any denizen of these fine neighborhoods for their thoughts on the East Side, and they’ll likely launch into a tirade filled with frightening images of overpriced apartments and boorish, flip-flop-clad college students. The neighborhood, they’ll say, is past its prime.

And I can understand that. I don’t think I’m being a crotchety old fart when I say that the East Side has changed a lot in the past 15 years, and not always for the better. The little amount of bohemia that remained in the mid-’90s has long been scrubbed clean and replaced by chain stores, student housing, and condos, condos, condos. (All three of these nefarious trends extend beyond the East Side, of course.) The loss of some iconic locales over the years has also hurt. Atomic Records is now a head shop, and Urban Outfitters and American Apparel are poor substitutes for the wonderfully beat-up stores that populated the long-shuttered Prospect Mall. (The crummy movie theater! The video store that always smelled like porn!)

So yeah, I can see why a lot of people think ill of the East Side, and view it as either past its prime or as a mere “starter neighborhood.” But I think those folks are missing some obvious selling points that Milwaukeeans often take for granted. Does the East Side still matter? I think it does. So before the whole joint goes bananas this Saturday at the Summer Soulstice Music Festival, I thought it might be good time to list a few reasons why the neighborhood is still worth a damn.

(Note: This isn’t intended as a “my neighborhood could beat up your neighborhood” pissing contest. Feel free to go nuts in the comments, of course.)

1. UWM. No other institution in town attracts more new residents than the University Of Wisconsin-Milwaukee. UWM enrolls more Wisconsin students than any other university in the state, and it remains the No. 1 landing point for future musicians, writers, artists, and photogenic bartenders. Yes, other schools bring in plenty of fresh faces each fall, but UWM wins by sheer numbers alone. The university enrolled 30,502 students in the 2010-11 school year, 25,271 of whom were undergraduates. (Compare that to Marquette’s total enrollment of 11,806.) Think of UWM and the East Side as the Ellis Island for Milwaukee’s creative community.

2. Businesses. Like I said, I’m not trying to start a neighborhood pissing contest, but the East Side does boast an impressive number of iconic businesses, restaurants, and watering holes. The Oriental and Downer Theaters, Landmark Lanes, Von Trier, Boswell Book Company, Comet Cafe, and Koppa’s are only a few. Factor in the Brady Street area (The Exclusive Company, Hi Hat, Angelo’s Piano Lounge, etc.), and you’ve got enough local treasures to blot out the dozens of fast food chains and CVS Pharmacies.

3. Bradford Beach. It’s hard to picture it now—what with all the babes, bros, and occasional sketchy dudes wearing jeans and binoculars—but Bradford Beach used to be nothing more than a disgusting, foul-smelling wasteland. Thanks to some forward thinking on the part of Milwaukee County, however, it’s now a sparkling, body-oil-drenched gem. On any given summer weekend, it’s easy to mistake the once lowly beach for a real, honest-to-God resort; or, at the very least, that resort the gang worked at during the third season of Saved By The Bell. Don’t get me wrong: I’m as pasty and ill-suited to shirtlessness as the next local writer, but the fact that Bradford is now regularly packed with hundreds of volleyball-playing bros is somehow heartening.

4. Music. Hear me out on this one. Live music on the East Side isn’t quite what it used to be, and the loss of The Globe East back in 2003 (eight years ago!) still stings. It’s clear that many of the quality shows have moved south to Downtown and Bay View. But the East Side still puts up a solid numbers. The Jazz Estate and the Miramar regularly bring in groups you’d never find anywhere else in town, and The Hotel Foster is doing right by the old Globe space by hosting occasional shows. Yield is a good under-the-radar destination for live music, and Y-Not III might be the most underrated venue in town. BBC is no slouch, either—look no further than the Juniper Tar/Testa Rosa/Mark Waldoch show set for June 25. The scene may not be what it once was, but I think it’s safe to say it’s the strongest it’s been in the past five years.

And that’s my piece. I know it’s a bit déclassé to end with a “What do you guys think?” but I’ll go for it anyway. Does the East Side still matter? Prove me right or wrong