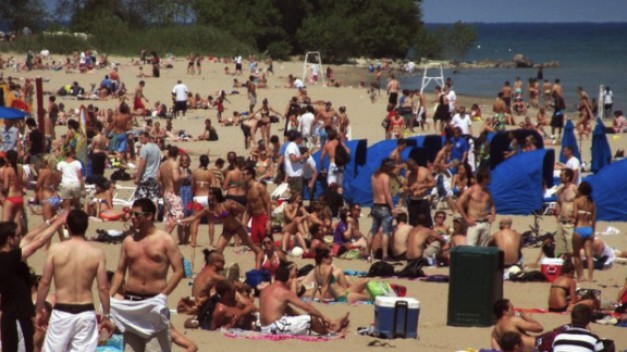 It’s the goal of A.V. Club Milwaukee to share all the wonderful things this city has to offer with as many people as possible. That’s why we’re doing our part to make our jittery neighbors to the north and west a little more comfortable the next time they venture into our nice little town. In today’s Suburbanite Scare Watch, we examine the most terrifying time of year in Milwaukee: summer.

Why some people are scared: Milwaukee went a little ape-shit yesterday, just like it does every Memorial Day. A three-day weekend coupled with the first truly summer-like weather of the year led to thousands of people taking to the streets, motorcycle throttles and car stereo volume knobs in hand. On our scenic lakefront, things got predictably crowded and a bit confused. According to the Journal Sentinel, Lincoln Memorial Drive was closed down late in the afternoon due to “heavy traffic volume.” Nothing really happened—no violence, no unruly behavior—though it seemed as if a lot of folks were expecting something awful to eventually happen.

Of course, this low-to-non-existent carnage could mean only one thing for the always erudite JS commenters: fear, fear, fear. Cue the coded (and sometimes not-so-coded) language!

“We left by 3 PM. By then all the creeps had arrived, walking five and more in bunches, taking up the entire sidewalk. What is so difficult about staying to your right, having some manners and respect for others? The cops should ticket these creeps.”

“Did yall see Shaquandra in her thong down there? DAAAAMN! She was wit Jamal and his cousin Ray Ray, those fools got busted fo smoking blunts.” (Comment since deleted.)

Why you shouldn’t be scared: Did we mention nothing actually happened? According to a police officer interviewed by Fox6 News, only a “few minor scuffles” were reported near the lakefront, and a whopping one arrest was made. That’s hardly the stuff of summer nightmares.

Look, we know that the folks who frequent the JS comment boards aren’t representative of your rank-and-file Milwaukeeans, or even your rank-and-file suburbanites. And we know that yesterday’s online outcry was relatively minor when compared to last year. But it’s still distressing to find a few mouth-breathers painting a decidedly peaceful crowd as a cause for concern. (It’s even more distressing to read such blatantly racist comments. What happened to your non-anonymous commenter experiment, Journal Sentinel?) Sure, we can understand how a horde of people walking along the lakefront might be unsettling for folks more accustomed to sparsely attended locales like, um, Summerfest, but it’s summer for Pete’s sake. Relax!

Oh, and it’s worth mentioning that all the craziness will cool down in a week or two—just like it does every year—and everyone will get right back to safely enjoying another wet, hot, Milwaukee summer. Crowds and creeps be damned.