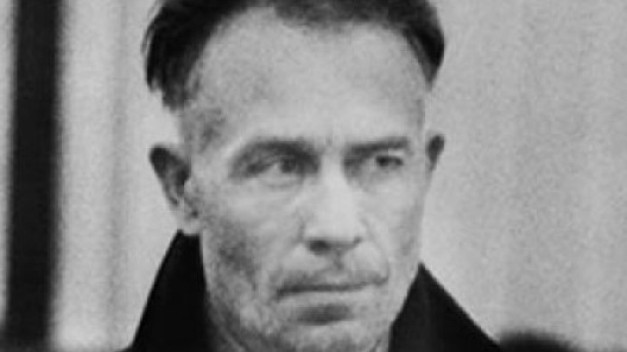 Leave it to a kook from Wisconsin to inspire some of movie history’s most iconic psychopaths. The horrific crimes of Plainfield, Wisconsin’s very own Ed Gein—crimes in which the deranged farmer exhumed the corpses of women who resembled his mother, stole their bodies, and wore their flesh—led to the creation of Psycho’s Norman Bates, The Texas Chainsaw Massacre’s Leatherface, and Silence of the Lambs’ Buffalo Bill. But for a man with such an extensive, ghoulish cinematic legacy, there are surprisingly few films about Gein himself.

So we had high hopes heading into 2007’s Ed Gein: The Butcher Of Plainfield; would this film fill the Gein-sized celluloid void by offering up a thoughtful, nuanced, and bone-chilling exploration of one of the most macabre serial killers of all time? Of course not! It’s yet another straight-to-DVD piece of crap with no higher aspirations than killing 90 minutes and making back its meager budget in foreign distribution deals. Looking for some quality Halloween entertainment? It’s the Great Pumpkin, Charlie Brown this ain’t.

For starters, the cast of Butcher is a fan-boy fever dream, stocked with ringers from 30 years worth of cult horror flicks. In other words, it’s terrible. Kane Hodder, best known as Jason Voorhees in Friday the 13th parts 7-10, stars as Gein. The bald, freaky-looking desert mutant from the original The Hills Have Eyes, Michael Berryman, has a brief cameo. The always-awful Priscilla Barnes even shows up in a plum role, leading to the sinking realization that yes, the film’s biggest star is a former cast member of Three’s Company.

Less than 10 minutes into this turkey, it becomes painfully clear that the filmmakers are more interested in following an invented subplot straight out of Walker, Texas Ranger than they are in exploring Gein’s twisted psyche. A young Plainfield deputy investigates the disappearance of a local woman while worrying about living up to his deceased lawman father’s reputation. He’s engaged to the sheriff’s daughter, of course, and lives with his alcoholic mother. Will the deputy crack the big case? Will his mother and his girlfriend get abducted by Gein? Will it all end in a big showdown cribbed from the final minutes of Se7en? Only a hack screenwriter with little to no understanding of the words “based on a true story” knows for sure.

Clearly, Butcher’s fidelity to its grim source material isn’t one of its strengths. Compressed time, composite characters, and good old-fashioned artistic license are fine, but making shit up out of whole cloth? Not so much. For instance, did you know that Gein had a zany grave robbing accomplice who did most of the grunt work? He didn’t, of course, but that doesn’t stop writer-director Michael Feifer from inventing one. “Ed, haven’t you had enough of dissecting these bodies?” asks the fictional “Jack” (Berryman) while digging up a woman’s corpse. “This might be immoral or something!” Gein answers his friend the only way he knows how: by beating him over the head with a shovel and dragging his body for three miles behind his pickup truck—just like in real life!

As for Hodder, he’s clearly wrong for the title role. He pitches his performance somewhere between “wooden” and “constipated,” and appears visibly uncomfortable whenever he’s called on to do anything but glare. Clocking in at 6’3” and about 8,000 pounds, he’s the polar opposite of the slight, feeble-looking, real-life Gein. With giant biceps and steroid-veins popping out his neck, seeing Hodder as Gein is like watching a role originally written for Michael Cera being performed by The Ultimate Warrior.

The film takes place in 1957, though you’d never guess it from the production design. The police sport suspiciously new walkie-talkies, frightened citizens dial 911 on rotary phones, and everyone is clearly wearing jeans from the Gap. The extras look like they’ve walked out of a Fleet Farm catalog circa 1996 and have the acting chops to match. Plainfield, Wisconsin is mysteriously surrounded by mountains, and palm trees can be spotted in a few shots. Apparently, Feifer’s idea of creating a period piece went no further than finding a couple of old cars and piping in some tinny big band music from time to time.

Wooden acting and miniscule budget aside, Butcher commits the cardinal sin of straight-to-DVD flotsam: it’s boring as hell. The film’s pace could generously be described as “glacial”: Gein abducts someone; the cops hem and haw for 10 minutes; rinse, lather, repeat. Every scene—and sometimes every shot—seems strangely disconnected from the last. As is customary with snooze-fests like Butcher, the gore is few and far between, and when it does come, it feels cheap and gratuitous. It’s not enough to simply show a man wearing a skin-suit made of nothing but nipples and vulvas; you have to earn it.

After 80-odd interminable minutes, the film ends on a particularly ridiculous note. The deputy and his girlfriend get in a car accident, the girlfriend is thrown from the car, and the deputy runs for help. While he’s gone, Gein magically shows up and abducts the girl. Instead of taking her to his barn for some usual slicing and dicing, he sits with her under a tree and explains his ghastly motivations. “We’re all just flesh!” he helpfully offers. Suddenly, the cops show up and our hero pistol-whips Gein into submission. Roll credits. Just like in real life!

Of course, in reality, there were no hero cops or damsels in distress. Gein was arrested without incident and spent the rest of his life in prison. He died in 1984—a detail the film surprisingly gets right. Other than that, Ed Gein: The Butcher Of Plainfield offers nothing but a few seconds of gore, some porn-quality acting, and a whole lot of bullshit. Instead of reality, it presents only a degraded, second-generation copy: a character based not on an actual man, but on the movie monsters he inspired. Not only is it dubious Halloween entertainment, it’s barely passable as junk entertainment. As strange as it is to say, a real-life ghoul like Gein deserves better.